Angelo Raffaele Sodano is an Italian prelate of the Catholic Church, a Cardinal since 1991. He was the Dean of the College of Cardinals from 2005 to 2019, and Cardinal Secretary of State from 1991 to 2006; Sodano was the first person since 1828 to serve simultaneously as Dean and Secretary of State.

On November 30, 1977, Pope Paul VI appointed him apostolic nuncio in Chile, one of the countries where he had served as secretary of the nunciature. While serving as nuncio, he began a lasting friendship with Augusto Pinochet, and was criticized for not caring for the human rights violations, and for protecting Fernando Karadima's child sexual abuse network Pia Union. (His years in Chile are whitewashed in his English Wikipedia article.)

On 22 June 2006, Pope Benedict XVI accepted Sodano's resignation as Secretary of State, effective on 15 September 2006. He had served in the diplomatic corps of the Holy See since 1959, including a decade as nuncio to Chile from 1978 to 1988.

On 21 December 2019, the same day it was reported that he shielded sexually abusive clergy in the Legion of Christ, Pope Francis accepted Sodano's resignation as Dean of the College of Cardinals.

The second of six children, Sodano was born on 23 November 1927 in Isola d'Asti, Piedmont, to Giovanni and Delfina Sodano. His father (1901-1991) was a Christian Democrat (a party cooperating with the CIA) deputy in the Italian Parliament for three terms from 1948 until 1963.[1] After studying philosophy and theology at the seminary of Asti,[2] Sodano was ordained a priest by Bishop Umberto Rossi on 23 September 1950, and then did pastoral work and taught dogmatic theology at the Asti seminary.

On 30 November 1977, Sodano, who speaks English, German, Spanish, French and Italian, was appointed titular archbishop of Nova Caesaris and apostolic nuncio (ambassador) to Chile, one of the countries where he had served as nunciature secretary.[5]

In Chile, taking the opposite view of the Archbishop of Santiago, Silva Henriquez, who worked to counter the power of the military junta, Sodano worked, through the appointment of bishops, to make the Chilean church evolve towards conservatism and away from liberation theology. Within the Church, who generally was hostile to the military regime of Augusto Pinochet, he looked for bishops more accommodating with the secular power.

In particular, he supports the “Pia Union” priestly association, controlled by the parish priest of El Bosque, Fernando Karadima, in whose church he makes many overnight stays. He promotes the expansion of Karadima's influence within the Chilean church after being appointed to Rome; Sodano worked to camouflage the sexual abuse of Karadima with the members of his association (in particular minors) is only mentioned after the conviction of the Chilean abbot by the Congregation for the doctrine of the faith in 2011.[6]

Sodano stayed silent about the government's human rights violations, although he later tried to give a different impression. In 1987, for example, seven Catholic priests sent a letter to Rome calling for Sodano to be recalled from Chile[7]. According to Senator Andrés Zaldívar, Sodano and Cardinal Raúl Silva Henríquez held a private meeting with Pinochet in 1980 with the aim of returning several exiles (including Zaldívar), but without result. A meeting with representatives of the Alianza Democrática (1983–1988), which took place on the occasion of the Pope's visit in April 1987, is also cited as evidence of Sodano's efforts to establish democratic structures.[8] 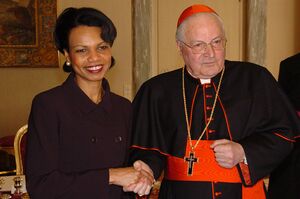 On 29 June 1991, Sodano became Cardinal Secretary of State, succeeding Cardinal Agostino Casaroli, who had retired on 1 December 1990.[9] On 10 January 1994, Pope John Paul II named Sodano Cardinal Bishop of the suburbicarian see of Albano. Sodano retained his relationship to the church of Santa Maria Nuova no longer as titular but in commendam, that is, in trust or in his custody.[10]

On 27 December 1998, he wrote, at the request of the democratic government of Chile, an official letter to the British Prime Minister Tony Blair stating that "the Chilean Government considers it an offence to its territorial sovereignty as a nation the fact of being deprived of the power to judge its own citizens" through the detention of Pinochet in Britain.[11] When in 2002 Sodano turned 75, John Paul invited him to stay on as Secretary of State, though this is the customary retirement age for heads of major Vatican departments. On 30 November 2002, exactly twenty-five years after he was first appointed a bishop, he was elected vice-dean of the College of Cardinals, succeeding Cardinal Joseph Ratzinger, who became Dean. In 2003 Sodano drew attention by quite positively commemorating the 500th anniversary of the election the Renaissance Pope Julius II.[12]

When Pope John Paul II died on 2 April 2005, Sodano, who participated in the 2005 papal conclave, was not generally seen as one of the papabili, the cardinals likely to become the next pope. This was largely due to his advanced age (although he was seven months younger than the cardinal who was eventually elected, Joseph Ratzinger, who took the name Benedict XVI), and his lack of experience outside the Roman Curia. During the conclave, because Cardinal Ratzinger, the pope-elect, was the Dean, Sodano as the Sub-Dean exercised the duties normally allotted to the Dean in asking the pope-elect if he accepted his election and by what name he would be called. Also as the Sub-Dean and the most senior Cardinal-Bishop, Cardinal Sodano discharged the duties normally allotted to the Dean at the new pope's papal inauguration. At the papal inauguration, Sodano presented Pope Benedict XVI with the Ring of the Fisherman, and along with the protopriest Stephen Kim Sou-hwan and the protodeacon Jorge Arturo Medina Estévez, was one of the three cardinals who made the public profession of obedience to the new pope.

Sodano's position as Secretary of State expired upon the death of John Paul II. Benedict XVI reappointed him to the position on 21 April 2005, despite the fact that he was past the customary retirement age. On 30 April Benedict ratified Sodano's election to the position of Dean of the College of Cardinals by the suburbicarian Cardinal Bishops,[13] adding as was customary the suburbicarian see of Ostia to his honorary titles.[14]

On 22 June 2006, Benedict XVI accepted Sodano's resignation as Secretary of State, effective 15 September 2006.[15] On 18 September 2012, Sodano was named by Pope Benedict XVI as one of the Synod Fathers of the 13th Ordinary General Assembly of the Catholic Synod of Bishops.

When Pope Benedict XVI resigned, Sodano as Dean of the College of Cardinals summoned the cardinals for the conclave during the sede vacante and was the principal concelebrant of the Pro eligendo Pontifice mass on the morning the conclave opened. He was not eligible to participate in the conclave, which elected Pope Francis. At the inauguration of the new pope, Sodano, as Dean of the college, presented the Ring of the Fisherman to Francis.

On 21 December 2019, Pope Francis accepted Sodano's resignation as Dean of the College of Cardinals,[16] following the Pope's annual Christmas meeting with officials of the Curia that opens with a greeting by the Dean.[17] As Dean Emeritus, Sodano no longer has the title of Cardinal-Bishop of Ostia, which is reserved to the Dean.

Former Irish minister for foreign affairs Dermot Ahern stated that in 2004, Sodano pressured him to "indemnify the Catholic Church against legal actions for compensation by clerical child sexual-abuse survivors" in Ireland, which Ahern refused.[18]

Jason Berry writes that Sodano, as John Paul II's secretary of state, "pressured Cardinal Joseph Ratzinger, the future Pope Benedict, in two notorious cases," the Hans Hermann Groër case and the Marcial Maciel case, to stop investigations into abuse.[19] In his address as Dean of the College of Cardinals to Pope Benedict XVI at Easter 2010, Sodano told him: "The people of God are with you and do not allow themselves to be impressed by the petty gossip of the moment, by the trials that sometimes assail the community of believers." Victims of clerical sex abuse interpreted the "petty gossip" remark as a highly inappropriate reference to their complaints.[20][21]

On 8 May 2010, the Austrian Catholic news agency Kathpress published remarks made by Cardinal Christoph Schönborn, in what was supposed to be a private conversation with newspaper editors. The Austrian cardinal criticized Sodano's "petty gossip" comment, and indicated that Sodano had blocked actions of then-Cardinal Ratzinger, who was serving as head of the Congregation for the Doctrine of the Faith, and was intending to investigate accusations against Schönborn's predecessor Cardinal Hans Hermann Groër. Schönborn added: "The days of cover-up are over. For a long while the Church's principle of forgiveness was falsely interpreted and was in favour of those responsible and not the victims."[22][23]

Sodano is one of many Catholic bishops and cardinals who are accused in an August 2018 letter by former Apostolic Nuncio to the United States Archbishop Carlo Maria Viganò of failing to act on reports of sexual misconduct by former cardinal Theodore McCarrick. According to Viganò, his predecessos in the nuncio position attempted to warn the Holy See about McCarrick, but McCarrick was shielded from discipline by a series of secretaies of state, including Sodano.[24][25]

On 21 December 2019, the Legion of Christ identified 33 priests and 71 seminaries as sex abusing 175 children for decades and stated that Sodano was the one who led efforts to cover up the reports of abuse when he was serving as Secretariat of State.[26][27] Sodano was accused of seeking a deal to bury documents detailing abuse. A third of the sex abuse cases which Sodano was accused of covering up involved notorious predator priest Marcial Maciel. The same day, Pope Francis accepted Sodano's resignation as Dean of the College of Cardinals.[28] However, the Vatican claimed he resigned due to his "advanced age."[29]