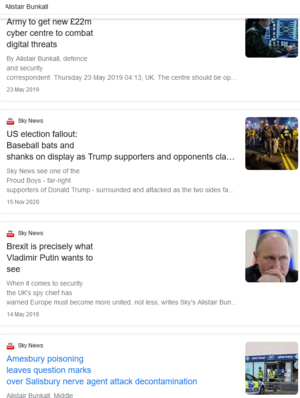 Bunkall joined Sky News as a general news reporter in 2007. He has reported extensively from Westminster, including on the MPs' Expenses Scandal of 2009.

He became Sky News Defence Correspondent in December 2012. He has reported on the conflicts in Afghanistan, Iraq, Yemen and South Sudan. He has also reported from North Korea[1] and is known for his access into some of the UK's most secretive establishments including the nuclear deterrent, covert drone base[2] and intelligence agencies. Bunkall has interviewed key world figures including Prime Ministers, NATO Secretary Generals, leading diplomats and military officers.