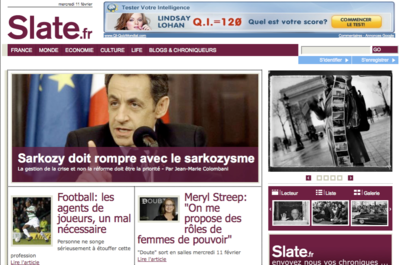 Slate.fr is the French version of Slate.com. The founders originally held 50 percent in the publishing company, but though successive capital infusions, “the flower of the French business establishment is […] shareholder of the website". In June 2017, Ariane and Benjamin de Rothschild took control of the magazine.

Slate.com owns only 15% of the capital of the French magazine and its five founders claim to have control[2].

In 2009, the capital of the company E2J2, which is the publisher of the slate.fr website, was made up of 50% by the five founding members, 15% by the Washington Post and 35% by Viveris Management.

In 2016, BFM Business noted that “the flower of the French business establishment is […] shareholder of the website. [...] The main shareholder (29%) is Benjamin de Rothschild, who contributed 2.85 million euros last year via his Luxembourg holding companies. The second shareholder (22%) is Viveris, a fund that uses the ISF deduction for investments in SMEs. The founders (Jean-Marie Colombani, Éric Lesser, Éric Le Boucher and Jacques Attali) now only hold 25% of the capital, because they have been diluted as successive fundraisings have taken place. In total, the site has swallowed more than 10 million euros since its creation in 2008”. In June 2016, Benjamin de Rothschild rose to 46.2% of the capital[3].

In June 2017, Ariane and Benjamin de Rothschild took control of Slate.fr through a capital increase through their company Cattleya Finance[4]. This change of shareholder was accompanied by the replacement of Éric Leser by Marc Sillam as managing director, and that of Charlotte Pudlowski by Christophe Carron as editor-in-chief.