Irving Lewis "Scooter" Libby, Assistant to the President George W. Bush and Chief of Staff to Vice President Dick Cheney since 2001, resigned 28 October 2005, after being indicted on five counts, of which he was later convicted on four.

He was sentenced to thirty months in prison on 5 June 2007.

Scooter Libby is a long-standing member of the group of hardliners and neoconservatives who pushed for the 2003 Iraq War.[1]

Before joining the White House staff, Scooter Libby was managing partner of the Washington office of the international law firm of Dechert, Price & Rhoads. He also served as Legal Advisor to the House of Representatives' Select Committee on U.S. National Security and Military/Commercial Concerns with the People's Republic of China, commonly known as the Cox Committee. [3]

After graduating from law school, Libby "went to work as a lawyer in Philadelphia, then got a job offer from his old Yale political science professor, Paul Wolfowitz, then Deputy Defense Secretary. In 1981, Libby went to work for Wolfowitz at the US State Department, then left in 1985 to go into private practice. Freed from his State Department duties, Libby was able to research 1903 Japan, which was the slice of time between the Sino-Japanese War and the Russo-Japanese War that he had decided should be the backdrop for his novel. By 1989, he was working again for Wolfowitz, this time at the Pentagon, and his novel "The Apprentice" was set aside with few regrets.

"'Shortly after I got there, we had the breakup of the Soviet Union and war with Iraq,' Libby said. 'So it turned out to be the perfect job.' 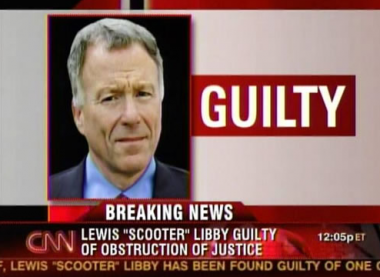 The indictments resulted from a grand jury investigation which began on 31 October, 2003, into the leaking of covert CIA agent Valerie Plame’s name. Department of Justice Special Counsel Patrick J. Fitzgerald and FBI "investigators have been trying to determine whether Libby or any other administration officials knowingly revealed" Plame's identity or "about their involvement to investigators. Plame's husband, Joseph C. Wilson, is a former diplomat and an opponent of the Iraq war who challenged US President George W. Bush’s assertion that Saddam Hussein was in possession of yellowcake nuclear materials."[8][9]

Scooter Libby "testified to a federal grand jury that he had been 'authorised' by Cheney and other White House 'superiors' in the summer of 2003 to disclose classified information to journalists to defend the Bush administration's use of pre-war intelligence in making the case to go to war with Iraq, according to attorneys familiar with the matter, and to court records," reported the National Journal. [10]

"Beyond what was stated in the court paper, say people with first-hand knowledge of the matter," Waas wrote, "Libby also indicated what he will offer as a broad defense during his upcoming criminal trial: that Vice President Cheney and other senior Bush administration officials had earlier encouraged and authorised him to share classified information with journalists to build public support for going to war. Later, after the war began in 2003, Cheney authorised Libby to release additional classified information, including details of the National Intelligence Estimate, to defend the administration's use of prewar intelligence in making the case for war." [11]