Sarah Everard was a 33-year-old marketing executive who disappeared in South London on the evening of 3 March 2021. Living at the time in London's Brixton Hill area, Sarah Everard went missing after leaving a friend's house near Clapham Common to walk home.[1]

On 9 March 2021, Wayne Couzens, a Metropolitan Police officer with the Parliamentary and Diplomatic Protection unit, was arrested in Deal, Kent, firstly on suspicion of Everard's kidnapping and later on suspicion of her murder. On 10 March 2021, her remains were discovered in woodland near Ashford, Kent. Couzens was charged with kidnapping and murder two days later.[2]

Wayne Couzens has also been arrested on suspicion of indecent exposure involving another woman at a fast food restaurant in south London on 28 February 2021.[3] 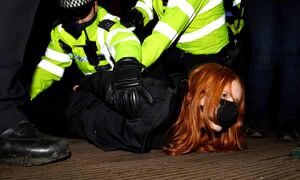 Protestor pinned to the ground at Sarah's vigil 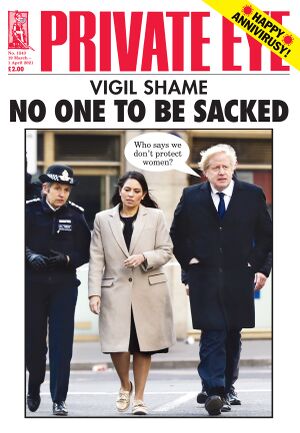 Neither Cressida Dick nor Priti Patel is sacked 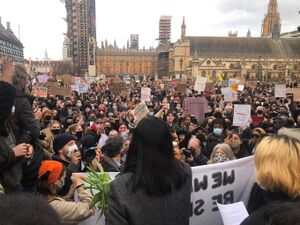 Addressing the rally against the PCSCB

On 11 March 2021, Home Secretary Priti Patel released a statement saying that "every woman should feel safe to walk on our streets without fear of harassment or violence", and Mayor of London Sadiq Khan stated that London streets are not safe for women or girls.[4] Patel announced that new laws are being considered to protect women against sexual harassment in public, including the potential of making public harassment a specifically defined crime.[5]

On 12 March 2021, a message was sent by the NPCC to all police chiefs that made it clear that the Home Secretary wanted them to stop people gathering at vigils; Priti Patel also promised she would personally urge people not to gather.[6] A vigil under the name Reclaim These Streets was planned for 13 March 2021 on Clapham Common was cancelled after talks with police broke down; The police had advised the organisers that it would be considered an illegal gathering under COVID‑19 pandemic restrictions and the High Court refused a request to intervene in the police decision.[7] Similar events planned for Edinburgh and Cardiff were officially cancelled in favour of online events.

A vigil for Sarah Everard took place on Clapham Common in London on Saturday 13 March 2021. Throughout the early part of the day, hundreds of people attended to pay their respects. Catherine, Duchess of Cambridge, attended, with Kensington Palace releasing a statement saying that the Duchess "remembers what it was like to walk around London at night before she was married."

At 18:00, when a large crowd congregated at the park's bandstand to hear speeches, four people were arrested for public-order offences and for breaching the Coronavirus Act 2020. The Metropolitan Police's decision to break up the crowd, and their behaviour in forcibly arresting attendees and walking over the flowers laid by them, prompted public anger. Sir Keir Starmer, the leader of the Labour Party, called the police response "deeply disturbing"; Prime Minister Boris Johnson said he was "deeply concerned" by footage of the events. Mayor Sadiq Khan called the police actions and arrests "neither appropriate nor proportionate".

Sir Ed Davey, the leader of the Liberal Democrats, called for Dame Cressida Dick, the Metropolitan Police Commissioner, to resign. Dick declined to resign and dismissed criticism of the police response.[9] Assistant Commissioner Helen Ball said the action was necessary because "hundreds of people were packed tightly together, posing a very real risk of easily transmitting COVID-19", and the Metropolitan Police Federation said that 26 police officers were assaulted.

On Sunday 14 March 2021, more than 1,000 people marched from New Scotland Yard to Parliament Square in protest when the police response was described as "hands-off" and "markedly different" to that on the previous day.[10]

On 15 March 2021, Zarah Sultana MP spoke at a rally in Parliament Square protesting against the Police, Crime, Sentencing and Courts Bill and called for the resignation of Home Secretary Priti Patel:

"The right to protest is under attack from the Conservatives' #PoliceCrackdownBill.

"This evening I joined women in Parliament Square to say: We will not be silenced. We don't accept more police powers.

"Let's #KillTheBill and defend our rights."[11]

This page imported content from Wikipedia on 23 March 2021.
Wikipedia is not affiliated with Wikispooks.   Original page source here
Retrieved from "https://wikispooks.com/w/index.php?title=Sarah_Everard&oldid=222867"
Categories: