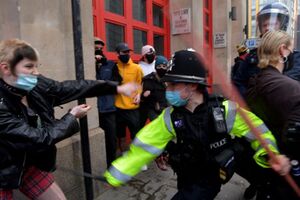 ★ Start a Discussion about this document
Did POLICE turn Bristol ‘Kill the Bill’ protest into a riot?

Attack: this image from the Bristol Post was captioned “Bridewell police station under siege” but the only violence I see is by a policeman attacking a woman with a truncheon and a stick. What do you see?

It takes only one comment like this to reverse the narrative completely – and here it is, in two tweets:

Protesters were being peaceful, people were sat in front of police station, as in literally sat.

2/2 Every step of the way police escalated. Every step of way they knew that is what they were doing, but were just perhaps bit surprised at how many of the crowd were willing to go from a sit down protest to fighting back rather than allowing police to attack them with impunity.[2]

Bristol Mayor Marvin Rees may find himself on the receiving end of some very sharp reactions after he supported the police without waiting for the other side of the story!

“Smashing buildings in our city centre, vandalising vehicles, attacking our police will do nothing to lessen the likelihood of the Bill going through. On the contrary, the lawlessness on show will be used as evidence and promote the need for the Bill.

“This is a shameful day in an incredible year for Bristol.

“We have had numerous protests. Our police, city representatives and I have been able to point out with pride that we have faced these moments of conflict without the physical conflict that others have experienced. Those who decided to turn today’s protest into a physical confrontation and smash our city have robbed us of this.”[3]

What will he have to say if it turns out to be true that the police are “those who decided to turn [the] protest into a physical confrontation and smash [the] city”?

For those of you condemning the apparent violence in #Bristol and muttering darkly about the #PolicingBill being pushed through, remember Orgreave and how that was reported.[4]

Considering all of the above, it seems far more likely that the police were responsible for the violence in Bristol last night, rather than a few hundred people who were, at the time, sitting down.

If those people defended themselves, this is no reason to condemn them or their protest for descending into violence. Everybody has the right to defend themselves against unprovoked violent attack, no matter whether the attacker is in a uniform or not.

If Bristol’s police were ordered to turn this event into a riot so their political leaders could use it as justification for the draconian Police, Crime, Sentencing and Courts Bill that will permit them to inflict brutal oppression on innocent people, then the plan appears to have backfired.

The peaceful protest was mostly over by the time they came out from the Bridewell. From a high point of around 3,000 people, their own figures say only around 500 were left when the violence began.

The others, having made their point, had gone home. No matter who started the violence, they have been smeared by the police claims.

And observers elsewhere have demonstrated that they are unimpressed by the protestations of the police and politicians – pointing out the future of protest under the Police Bill:

Let's be clear the mob you should fear isn't the one on the streets of Bristol but running the government. (John Smith)[5]

Yet centrists say people are wrong to get angry about it.

We might never get another chance - yet here they are telling us to just be nice and get along. (Evolve Politics)[6]

Protest quietly and be ignored by government.

Protest noisily and spend up to 10 years in prison.

You can be ignored.

Or you can be ignored.

This is the choice Boris government wants to give you. (Marcus Chown)[7]

Let's be real, nothing would be happening in Bristol were it not for police attacking the vigil for Sarah Everard last weekend, or the government trying to push through a bill which restricts civil liberties.

You don't keep the peace by clamping down on peaceful protest. (Ash Sarkar)[9]

Replying to Ash Sarkar and Labour Grassroots A few agents provocateur to make the gullible public panic & demand the bill goes through?[10]

At the end of the day, there is a big question to be answered – and it’s one that would not even be considered if the police had not made themselves the puppets of Conservative governments many times in the past:

Or did you organise this in advance in order for the police bill to get through the house?

"Thuggery and disorder by a minority will never be tolerated.

"Our police officers put themselves in harms way to protect us all.

"My thoughts this evening are with those police officers injured." (Carole Hawkins)[11]

It is impossible to condemn the people for the Bristol ‘Kill the Bill’ riot when we know it is entirely possible that it was engineered by Priti Patel and the police.