Roger Hertog [1] is an American businessman, financier, and conservative philanthropist. He currently serves as president of the Hertog Foundation and chairman of the Tikvah Fund, which promotes Jewish thought and ideas.[2][3][4]

Hertog was described by Mark Gerson, "president of the investor-relations company the Gerson Lehrman Group and editor of The Neoconservative Reader", as the "one man who has, far more than anyone else, financially enabled this movement to exist", "this movement" being the "intertwined world of the neoconservatives".[5]

Born to German Jewish immigrants, Hertog was raised in The Bronx and attended public schools. His first job was in the mail room of a financial company while attending City College at night. Eventually, he joined Oppenheimer & Co. in a clerical position. At Oppenheimer, he met his future business partner, Sanford Bernstein. In 1967, Hertog joined Sanford C. Bernstein, & Co. The struggling company went on to become one of the world's leading asset management firms. Hertog remained president of the firm until its merger with Alliance Capital Management in 2000. In 2002 it was valued at about $100 billion.[6]) He retired in 2006 from AllianceBernstein L.P. and remains Vice-Chairman Emeritus.[1][7][8]

In February 2003, the Sun's "most memorable contribution to American letters [was] its statement that Iraq War protesters were guilty of 'treason'."[10][11]

Hertog and Kovner "also chipped in to join" neoliberal Martin Peretz as co-owners of The New Republic (TNR),[5][12] which was completely bought out in February 2007 by CanWest.[13]

Hertog and Kovner are also on the board of the Manhattan Institute, where "Gerson and William Kristol are also trustees, as well as the Washington, D.C.–based American Enterprise Institute.[14] The A.E.I., a favored neoconservative think tank, has recently [2003] served as a kind of human-resource office" for the Bush administration. The A.E.I. also served as "the venue" on February 26, 2003, that President George W. Bush "chose to step up to explain his intentions toward Iraq."[5]

Hertog is "a primary financial backer behind"[5] and serves on the board of the Shalem Center[19],[20] a "think tank known as the A.E.I. of Israel.[5] In December 2005, Hertog was the Center's president.[21] According to William Kristol, who also serves on the board, the Center was "founded as Israel's first 'neoconservative think-tank,' ... in an effort to give the Israeli right a better foundation in history, economics, archaeology and other topics."[22]

In March 2002, Hertog was a "member of the staunchly conservative Club for Growth, a group of self-described 'supply side Reaganites' run by TNR nemesis Stephen Moore."[24]

In January 2007, Hertog became chairman of the board of trustees of the New York Historical Society.[25] He is also a member of the advisory board of The Gilder Lehrman Institute of American History, serves on the board of the New York Public Library, and is the founder of the School Choice Scholarships Foundation.[3] 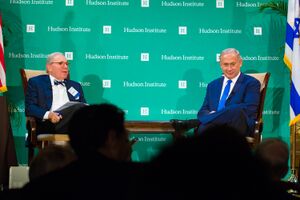 Hertog is co-president of the Hertog Foundation and chairman of the Tikvah Fund.[26][27]

His family foundation supports several educational fellowships for college students and young professionals. In 2010, the foundation launched the Political Studies Program, an elite, full-scholarship summer program for undergraduates in the theory and practice of politics. In 2013, in partnership with the Institute for the Study of War, Hertog expanded by launching a two-week summer seminar on warfare and military doctrine for advanced undergraduates, the War Studies Program. The Foundation offers other programs and seminars in three main areas: Political Thought and Philosophy; War and Foreign Affairs; and Economics and Domestic Policy.[28][29][30]

Hertog often donates to Jewish organizations and causes. His main avenue is through the Tikvah Fund. Hertog has served as the chair of Tikvah since 1999. Tikvah runs and invests in a wide range of initiatives, including educational programs, publications, and fellowships, around the world. As part of his work with Tikvah, Hertog helped fund the Shalem Center in Israel.[31] The Center has since become Shalem College, accredited in 2013 to confer bachelor's degrees.[32] Hertog has also given money to the Anti-Defamation League, Taglit-Birthright Israel, and American Friends of Shalva.[7]

During the 1990s, Hertog, along with other investors, launched one of the first privately funded school-voucher programs, funding 1,000 scholarships annually for poor families interested in sending their children to private schools. Over 25,000 applied for the scholarships. He has invested in the Success Charter Network and Families for Excellent Schools in New York. He also funded a study on the charter school movement in New York City and ways to better invest in it.[1][33]

On November 15, 2007, Hertog was awarded a National Humanities Medal in a White House ceremony with U.S. President George W. Bush.[34] The citation accompanying the award praised Hertog for "enlightened philanthropy on behalf of the humanities. His wisdom and generosity have rejuvenated institutions that are keepers of American memory."[35][36]