Project Syndicate is a commercially-controlled media outlet with very close ties to the Deep State. The project was set up by George Soros.[citation needed] The group features comment by literally hundreds of Bilderbergers[citation needed]. A large number of its articles and comments are echoed by downstream corporate media. The desired narratives are picked up and disseminated, often indirectly, and the reader or viewer does not even find out whose opinion they are being presented with as “news”.

The group "produces and delivers original, high-quality commentaries to a global audience. Featuring exclusive contributions by prominent political leaders, policymakers, scholars, business leaders, and civic activists from around the world, we provide news media and their readers cutting-edge analysis and insight, regardless of ability to pay. Our membership includes over 500 media outlets – more than half of which receive our commentaries for free or at subsidized rates – in 156 countries."[1] 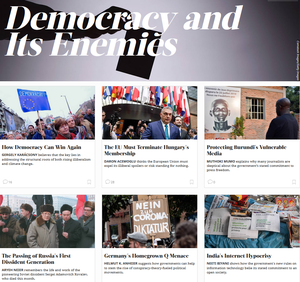 For Project Syndicate, "democracy" means that people get to choose from candidates accepted by the PS sponsors[2] 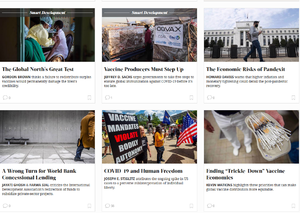 The "members" in the metadata (top left on page) refers to the Board and some staff members per 2021[4] and the Board for 2008.[5] Most of them have some sort of client relationship with George Soros.

Project Syndicate has around 80 authors who submit opinion commentaries on a regular or monthly basis.[6] Although some of its authors (Bill Gates, Melinda Gates, George Soros, Mohammed bin Rashid al Maktoum) are also among its foundation funders, Project Syndicate doesn't routinely display any kind of disclosure notice associated with its articles.[7] Bios for authors are frequently PR blurbs emphasizing positive associations while not revealing potential conflicts of interest, such as the following bio for Tony Blair:

"Tony Blair was Prime Minister of the United Kingdom from 1997 to 2007. Since leaving office, he has founded the Africa Governance Initiative, the Tony Blair Faith Foundation, and the Faith and Globalization Initiative."[8]