Peter "Pete" Buttigieg is a US spook,[1] politician and prospective candidate in the US/2020 Presidential election. He is United States Secretary of Transportation since February 3, 2021.

Buttigieg is a US Naval Intelligence Lieutenant.[2] He received his training c. 2005 and was emplaced with Business Intelligence consultant McKinsey & Company in 2007 where he wrote internal newsletters and helped launder heroin money through Fedwire.[citation needed]

After graduating from Harvard, he worked at the Cohen Group, a consulting firm founded by former Secretary of Defense William Cohen that maintained an extensive client list within the arms industry.

He worked as a consultant at the management consulting firm McKinsey from 2007 to 2010.

In 2008, he signed up with the international lobbying firm Independent Diplomat. The company is founded by a self-described anarchist named Carne Ross. Independent Diplomat represents an array of non and para-state entities seeking recognition on the international stage. Ross’s client list has included the Syrian Opposition Coalition, which tried and failed to secure power through a Western-backed war against the Syrian government[3]Buttigieg went on a 24 hours holiday to the autonomous Somalian region of Somaliland (reminiscent of Obama's 1981 holiday in Pakistan), and wrote an opinion piece in the New York Times about it, where he faithfully relayed the region's pro-independence line back to the American public.[4]

Early on in his military career, Buttigieg worked as an intelligence analyst at US European Command, where he “conduct[ed] research and analysis of information to create accurate, timely intelligence products in support of USEUCOM theater operations,” "including operations in Africa and the former Yugoslavia.”[citation needed]

From there, he was sent to Afghanistan[1] where he assisted DARPA in creating an ethnographic map of Central Asia and arming proxy fighters in Iran and Tajikistan.[citation needed]

Buttigieg spent his six months in Afghanistan in 2014 with a little-known unit that operated under the watch of the Drug Enforcement Administration. It was the Afghanistan Threat Finance Cell (ATFC), according to his appointment papers. The job description in his discharge papers is blank.[2]

At the ATFC, Buttigieg “oversaw the analysis and operations conducted from ATFC Kabul HQ.” He also “coordinated intelligence sharing and targeting deconfliction with multiple organizations and represented ATFC at high level briefings.”

ATFC’s primary official task was to bust up the Taliban drug trade with the help of law enforcement and intelligence agencies. In Buttigieg’s papers, the ATFC is said to “identify and disrupt Taliban, Al-Qaeda and other insurgent financial/material support networks in Afghanistan by bringing to bear on these groups the full spectrum of interagency and government tools and authorities.” During the year of Buttigieg’s deployment in Afghanistan, the United Nations reported that opium production skyrocketed and that “Afghanistan produces some 90 percent of the world’s illicit opiates.”[2]

In 2012, he was placed for grooming as a politician, gradually building up a resume in South Bend, Indiana.[citation needed] 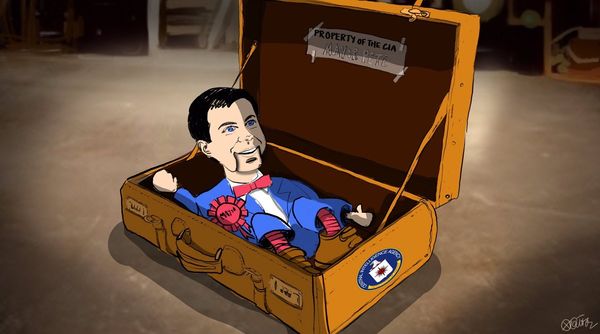