An RNA vaccine or mRNA (messenger RNA) vaccine is a type of vaccine that transfers molecules of synthetic RNA into human cells. Once inside the cells, the RNA functions as mRNA, reprogramming the cells to make the foreign protein that would normally be produced by the pathogen (e.g. a virus), or by cancer cells.

These experimental vaccines have been particularly prominent in the 2020 rush for a COVID-19/Vaccine; the definition of what constitutes a vaccine was changed for the technology.[1]

As far as it is known (given the interest, it is not unlikely secret military experiments have been done), RNA vaccines have never been widely used on humans before, and long-term consequences are unknown.[3]

In a RNA vaccine like the Covid-19 vaccine, once injected into the body. it will hijack the cell to produce proteins (these proteins are parts of the virus). These types of messenger RNA vaccines are even self-amplifying. That means they encode not only the protein antigen of interest to elicit an immune response but also produce their own RNA dependent RNA polymerase, so that they can force the cell to replicate more copies of it. Then it is in effect an artificially created self-replicating virus[4].

In 2016 MIT engineers funded by the Department of Defense developed an easily customizable RNA vaccine that can be manufactured in one week, allowing it to be rapidly deployed in response to disease outbreaks. They designed vaccines against Ebola, H1N1 influenza, and Toxoplasma gondii (a relative of the parasite that causes malaria), which were 100 percent effective in tests in mice. The researchers also believed that their vaccines would be safer than DNA vaccines, another alternative that scientists are pursuing, because unlike DNA, RNA cannot be integrated into the host genome and cause mutations[5].

Concerns regarding the safety of the technology are getting reported worldwide.[6][7][8] In the experiments for the COVID-19/Vaccine, some very severe side effects have already been reported.[9][10][11] RNA/mRNA vaccines are cheaper to produce, [12] but liability for vaccine damage in some countries like the US is put on the state in general and manufacturers have been exempt from liability in advance in other coutries.[13][14][15]

Regular vaccine testing needs periods up to ten years and more before market maturity.[16] Due to the speed with which the RNA/mRNA vaccines are pushed onto the market, the manufacturer can not produce the product in a stable, durable condition and so some of these vaccines need extremely deep-freezing during transport and storage.[17][18]

At the beginning of the mass vaccination effort it was reported that some mRNA vaccines need deep freeze (-70/-75 Celsius) and would start to disintegrate when the temperature is higher,[19][20] Moderna can be stored at -20 Celsius.[21] Wolfgang Wodarg is of the opinion that the need for deep freeze was a ruse to move the first months of injecting the population away from local, primary care physicians who know many of their patients personally and who would recognize injury and deaths from the vaccine and therefore would likely sound the alarm early on, therefore hindering the mass vaccination effort.[22] These temperature requirements have become a much, much less prominent topic as time moved on. 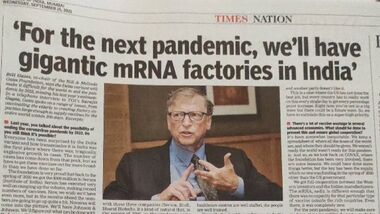 In September 2021, Gates promised to have "so much factory capacity that, even within 200 days, we could make enough vaccines for the entire world."[23]

Because of the possible wide effects that can be created, the U.S. Defence Advanced Research Projects Agency has long been very interested in RNA vaccines, and have researched them for more than a decade.[24]

Bill Gates has been heavily pushing for a RNA vaccine, and wants to vaccine all 7 billion people in the world against Covid-19.[25]

As of 2020, there are no RNA vaccines approved for human use, but multiple companies, including CureVac and Moderna - both with DARPA and Gates connections - work in the development of RNA vaccines, and a number of RNA vaccines are under express development with the stated purpose of combating the COVID-19 pandemic.

“So, we all assume that vaccines will be approved next year. We don't know exactly how they work, how well they work, what they do, but I am very optimistic that there will be vaccines, yes.”
Lothar Wieler (14 October 2020)  [26]
RKI President

“[...] also people will die in temporal connection with the vaccination. Then it is extremely important to find out whether the reason was the vaccination or another underlying disease. Because we will vaccinate the high-risk groups at the beginning. These are precisely the old and very old people, who of course also have a higher risk of dying, simply because they have already reached an advanced age.”
Lothar Wieler (5 December 2020)  [27]
RKI President