Ian Burnett, Baron Burnett of Maldon, is a British judge and the current Lord Chief Justice of England and Wales.[1]

Ian Burnett was called to the bar at Middle Temple in 1980, and became a bencher there in 2001. From 1982, he practised at Temple Garden Chambers, serving as head of chambers from 2003. He was made a QC in 1998. He practised mainly in public and administrative law, acting on the inquiry into the 1987 Kings Cross fire, the inquiry into the convictions of the Guildford Four and Maguire Seven, the inquiries after the 1997 Southall rail crash and the 1999 Ladbroke Grove rail crash, and the inquests after the 1997 deaths of Diana, Princess of Wales, and Dodi Fayed.

It was announced in July 2017 that Sir Ian Burnett would replace Lord Thomas of Cwmgiedd as Lord Chief Justice of England and Wales from 2 October 2017, becoming at age 59 the youngest Lord Chief Justice since Lord Parker of Waddington in 1958.

On 12 October 2017, it was announced that Sir Ian Burnett would be awarded a life peerage and was created Baron Burnett of Maldon, of Maldon in the County of Essex, on 30 October 2017.[2]

The Lord Chief Justice of England and Wales, Ian Duncan Burnett, is just the sort of chap you would want to play the role in a comic opera production. Burly, with a broad open face crowned with full white hair, he exudes solidity, bonhommie and natural command. You expect him to deliver his judgement and then stroll over the Strand to Simpson’s for a few thick slices of roast sirloin and a bumper of claret. I don’t mean that as a criticism; I like nothing better myself.

The Lord Chief Justice doesn’t just get his own office; he does not just get the best scarlet silly costume you can imagine; he gets his very own court. What a court it is; acres of polished wood, larger than some theatres; galleried and storeyed, walls at every level lined all round with thousands upon thousands of exquisitely bound law books, locked behind glass doors which I strongly suspect are only ever opened to add another book destined to spend its natural life in there unvisited, with no possibility of parole.

The Lord Chief Justice gets a very high bench, so you all have to look right up to him; a construction made of several tons of mahogany, which looks like it should be draped with potted palms, have moustachioed waiters in tight white jackets popping in and out of its various stairways and entrances carrying silver trays, and house a string quartet in the corner. Rumour has it that there is in fact a string quartet in a corner, which has been trying to leave since 1852.

The Lord Chief Justice suddenly materialises from his own entrance behind his bench, already high above us, so he doesn’t have to mount the mahogany and risk tripping over his scarlet velvet drapery. I like to imagine he was raised up to the requisite level behind the scenes by a contraption of ropes and pulleys operated by hairy matelots.[3]

Speaking at his annual press conference on Tuesday, 1 December 2020, Lord Burnett warned of unprecedented levels of political interference over the work of courts in England and Wales, suggesting that MPs should be taught about “boundaries”.

“There has been nothing quite like it in my experience,” he added.

“There needs to be sensitivity displayed by all branches of the constitution - so that is the legislature, the executive and the judiciary as to the proper sphere of the others.

His comments came a day after the Attorney General, Suella Braverman, took the rare step of personally calling for the Court of Appeal to increase the prison sentences given to three teenagers who killed a police officer.

The Lord Chief Justice has publicly spoken out against comments by Boris Johnson and Priti Patel on immigration lawyers, after a backlash against Home Office material on “activist” solicitors representing asylum seekers. He said lawyers should “not be subject to criticism for doing their job” by representing clients.

Lord Burnett also called for the government to ensure that the justice system is properly funded to deal with case backlogs that have mounted during the coronavirus pandemic. He said that courts were currently subject to financial constraints despite being “demand-led”, contrasting their position with other public services:

“The longer the gap between the reporting of an offence and its eventual trial, the more likely it is that something will go wrong. It can be as simple as important witnesses losing interest, for example, in continuing to pursue the case.”[4] 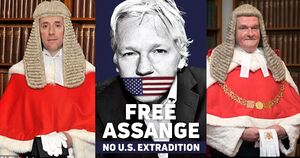 On 2 December 2021, it was revealed that Julian Assange’s fate lies in the hands of Lord Burnett who is a close friend of Sir Alan Duncan - the former Foreign Office minister who called Assange a “miserable little worm” in Parliament.[5]

On 11 August 2021, Lord Justice Holroyde overturned District Judge Vanessa Baraitser's decision, taken on health grounds, not to extradite Julian Assange when he ruled that the US government was able to appeal that decision.[6]

After a two-day hearing of the Julian Assange extradition case on 27/28 October 2021, the Lord Chief Justice Lord Burnett and Lord Justice Holroyde sided with the US on 10 December 2021, when the High Court reversed Vanessa Baraitser's decision not to extradite the WikiLeaks founder.[7]

We remit this case to the Westminster Magistrates' Court, with a direction to proceed as the DJ (Vanessa Baraitser) would have been required to do if she had decided differently the relevant question of whether Mr Assange’s mental condition was such that it would be oppressive to extradite him, namely by sending the case to the Secretary of State.

We will be seeking leave to appeal the High Court's decision to the UK/Supreme Court.

This page imported content from Wikipedia on 2 December 2021.
Wikipedia is not affiliated with Wikispooks.   Original page source here
Retrieved from "https://wikispooks.com/w/index.php?title=Ian_Burnett&oldid=236370"
Categories: