He was convicted of corruption in 2005 and has served time in prison.[1] Røkke was considered Røkke Norway's fifth richest with a fortune of NOK 36 billion in 2018.[2] He is part of Bill Gates' billionaire network The Giving Pledge.

Starting as a fisherman, Røkke launched his business career with the purchase of a 69 foot trawler in the United States in 1982, and gradually built a leading worldwide fisheries business. In 1996, the Røkke controlled company RGI purchased enough shares in Aker ASA to become the company's largest shareholder, and later merged his company RGI with Aker ASA. Røkke serves as chairman of Aker ASA, as well as a director of Aker BP, Kværner, Ocean Yield, Aker BioMarine and Aker Energy. As at 31 December 2018, Røkke holds 68.2 per cent of the shares in Aker ASA through his investment company TRG AS and its subsidiaries.[3]

The newspaper Dagbladet documented in 2002[4] that Kjell Inge Røkke paid former Minister of Health Tore Tønne a "success fee" of NOK 1.5 million for consultancy activities that Tønne performed for Røkke for a six-week period during the acquisition of Kvaerner, while Tønne had severance pay under the ministerial post. An attempt was made to disguise the fee by the law firm BA-HR making an incorrect invoice[5]. Director Kari Breirem in BA-HR refused to sign the payment of NOK 1.5 million to Tønne. The police prosecuted Tønne and there was extensive media coverage. Tønne took his own life shortly after, December 21, 2002. The indictment against Tønne was dropped after the suicide. Breirem was suspended from BA-HR for taking confidential documents from the office, and was dismissed when she demanded compensation from BA-HR[6] and in the subsequent case a settlement was reached where Breirem received final package. Lawyer Øyvind Eriksen (later CEO of Aker ASA[7]) in the law firm BA-HR was later fined NOK 50,000 for violating the Accounting Act. Among others, Kari Breirem claimed that Røkke had been in charge of the case behind the scenes.[8]

Røkke was convicted in 2005 for corruption involving the illegal purchase of a boat license,[9] and served 24–25 days of a 120-day prison sentence before released on parole.[10]

In June 2007, the Norwegian government, represented by Minister of Trade and Industry Dag Terje Andersen (Labour), bought 30 percent of Aker Holding for NOK 4.8 billion. Aker Holding owns 40 percent of the then Aker Kvaerner. The trade was criticized for poor timing[11] (for the government), inadequate procedures and unclear motives on the part of the state[12]. In 2020, Nettavisen estimated that the state had lost NOK 4.4 billion on the purchase.[13] 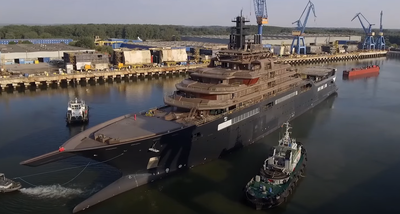 Marketed as a philanthropic initiative, his superyacht REV Ocean initiative serves multiple purposes: as a personal pleasure vessel, a junket for scientists and activists who say the rights things; wonderful for tax purposes; good for the public image; and handy for finding new resources in the ocean

In an interview with the Norwegian newspaper Aftenposten (published 1 May 2017) Røkke said he planned to give away most of his fortune. As a further step in this plan, he joined the Giving Pledge in 2017 and founded the REV Ocean initiative.

REV Ocean, lead by former WWF Norway CEO,Nina Jensen, is working to improve our understanding of the ocean and foster concrete solutions through three initiatives: the world's largest research and expedition vessel (REV), the World Ocean Headquarters and an open, global data platform.[14] A 183m research and expedition vessel, the REV Ocean, is due for final delivery to Røkke in 2022. The world’s longest super-yacht, it is reported to have three swimming-pools and a 35-seat auditorium.[15]

This page imported content from Wikipedia on 22.09.2021.
Wikipedia is not affiliated with Wikispooks.   Original page source here
Retrieved from "https://wikispooks.com/w/index.php?title=Kjell_Inge_Røkke&oldid=228975"
Categories: