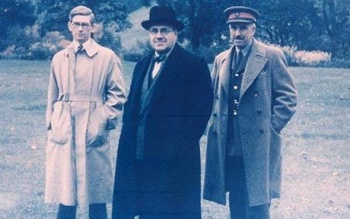 Harry Hinsley, Sir Edward Travis and Brig Tiltman, who helped negotiate the intelligence sharing agreement between Britain and the US, in Washington in November 1945 Photo: NATIONAL ARCHIVES

'UKUSA' is the somewhat obvious acronym accorded the March 1946 secret agreement between the UK and USA concerning Communications intelligence sharing and under which the global Echelon system was built. Both the agreement itself and the Echelon system continue in operation (July 2010) with the technical capabilities of Echelon undoubtedly vastly greater than envisaged for it at the outset. Part of the agreement states:

“It will be contrary to this agreement to reveal its existence to any third party whatever” and that “each party will seek the agreement of the other to any action with third parties and will take no action until its advisibility is agreed upon.”

This explains why, in spite of its existence being widely accepted for decades, it has never been officially acknowledged.

The consequent Ministerial 'Omerta' has recently produced moments of high farce, as in the matter of allegations of UK collusion in torture, with the then UK Home Secretary David Miliband going through all manner of contortions to explain why intelligence documents that proved Binyam Mohammed's allegations could not be made public. [1] Pre-emptive deflection of attention on the agreement has often taken the form of emphasising an alleged UK-USA 'Special Relationship' - an ambiguous phrase usually understood in cultural/language etc terms but equally applicable in logic to the UKUSA agreement itself - all of which is illustrative of the devious workings of the bureaucratic mind when faced with a dilema.

The agreement has probably undergone it's own evolution too. However, as is amply illustrated by ministerial evasions it is not only still operational but highly valued by the UK - crocodile tears and backside-covering notwithstanding.

A series of documents relating to the setting up of the agreement and the first few years of its operation were declassified in June 2010 and are available on the UK National Archives web site [2]. A more substantial collection covering the period 1940-1956 is available from the US NSA website. [3]

This phrase is used to refer to the members of UKUSA.

In 2014 Privacy International brought a legal challenge to the European court of human rights, arguing that the UKUSA agreement should be made public. Rosa Curling, of the law firm Leigh Day, which represents PI, stated: "The UK's Freedom of Information Act precludes government authorities from disclosing to the public information directly or indirectly supplied by GCHQ. This absolute exemption is unlawful and contrary to article 10 of the European convention on human rights, which provides for the right to freedom of expression, which includes the right to receive information. It cannot be correct that all information, without exception, directly or indirectly supplied by GCHQ is exempt from public disclosure. With the credibility and public confidence in the activities of the UK's secret service at an all-time low, it is crucial that the [Strasbourg] court considers whether the current darkness in which GCHQ operates is allowed to continue."[4]

Although the UKUSA alliance is often associated with the ECHELON system, processed intelligence is reliant on multiple sources of information and the intelligence shared is not restricted to signals intelligence. The following table provides an overview of the government agencies involved and their respective responsibilities within the "Five Eyes" community:[5]