Document:Revenge Is Mine Saith Washington 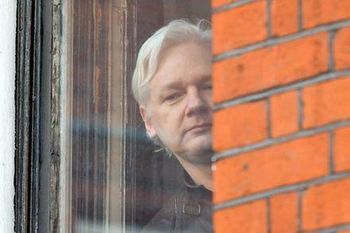 Julian Assange at a window of the Ecuadorian
Embassy in London. November 2018

★ Start a Discussion about this document
Revenge Is Mine Saith Washington

Justice has disappeared in the West. In Justice’s place stands Revenge. This fact is conclusively illustrated by Julian Assange’s ongoing eight year ordeal.

For eight years Julian Assange’s life has been lived in a Kafka Police State. He has been incarcerated first under British house arrest and then in the Ecuadoran Embassy in London, despite the absence of any charges filed against him.

Meanwhile, the entirety of the Western world, with the exception of former Educadoran President Rafael Correa and a UN agency that examined the case and ruled Assange was being illegally detained by the UK government’s refusal to honor his grant of political asylum, [1] has turned its back to the injustice.

Assange is locked away in the Ecuadoran Embassy, because to protect him from false arrest, former Ecuadoran President Correa gave him political asylum. However, the corrupt and servile UK government that serves Washington, and not justice or law, refused to honor Assange’s asylum. The US vassal known as the UK stands ready to arrest Assange on Washington’s orders if he steps outside the embassy and to hand him over to Washington, where a large number of both Democrats and Republicans in Congress have said he should be executed. The Trump regime, carrying on the illegal practices of its forebears, has a secret indictment waiting to be revealed once they have their hands on Assange.

The current president of Ecuador, a servant of Washington, Lenin Moreno — a person so lacking in character that his name is an insult to Lenin — is working a deal with Washington to rescind Assange’s grant of asylum so that the Ecuadoran Embassy in London has to expel Assange into the hands of Washington.

What has Assange done? He has done nothing but to tell the truth. He is a journalist who heads Wikileaks, a news organization that publishes leaked documents — exactly as the New York Times published the leaked Pentagon Papers from Daniel Ellsberg. Just as the publication of the Pentagon Papers embarrassed the US government and helped to bring about the end of the senseless Vietnam War, the documents leaked to Wikileaks embarrassed the US government by revealing Washington’s war crimes, lies, and deception of the American people and US allies.

The allies, of course, were bought off by Washington and remained silent, but Washington intends to crucify Assange for the embarrassment and payoff expense he caused the criminal government in Washington.

In order to assert authority over Assange, Washington is using the extra-territoriality of US law, a claim that Washington bases not on law but on might alone and uses to violate the sovereignty of independent countries. Assange is a citizen of Australia and Ecuador. He is not subject to US law. Even if he were, he has committed no espionage. The false equivalence Washington is trying to establish between the exercise of the First Amendment and treason shows how totally lost are the American people. The silence of the US media demonstrates that the presstitutes don’t mind losing the First Amendment’s protection as they have no intention of telling any truths.

Washington’s secret indictment — it is secret so that two-bit punks such as James Ball can write in the Guardian that Assange faces no threat of arres [2] — most likely accuses Assange of espionage. But it is not legally possible to accuse a non-citizen operating outside the country of espionage. All countries engage in espionage. Every country on earth could accuse Washington of espionage and arrest the CIA. The CIA could, as it often has, accuse Israel of espionage. Of course, any Israeli, such as Jonathan Pollard, who is convicted of espionage in the US becomes a point of contention between Washington and Israel and Israel always wins. The corrupt Obama regime released Pollard from his life sentence on orders and, no doubt, generous bribes, from Israel.

If Assange were Israeli, he would be home free, but he is a citizen of two countries whose governments place high value on being Washington’s vassals.

There was a time in America, many decades ago, when the Democrats stood for justice and the Republicans stood for greed.

There was a time in America, prior to 9-11, when the media would have rushed to the defense of the freedom of the press and defended Assange from his mistreatment and false charges. To be sure that the reader understands the mistreatment of Assange, it is identical to the mistreatment of Cardinal Josef Mindszenty of Hungary whose asylum in the US Embassy in Budapest was not acknowledged by the Soviet government, forcing Mindszenty to live out all but three years of his remaining life in the US embassy. President Nixon negotiated his release in 1971, but the Nixon haters give Nixon no credit for his attention to one man locked away in an injustice part of the earth.[3]

Today there is no such attention to injustice except for the “victim” groups in Identity Politics. Where is the champion of Assange now that Rafael Correa has to live abroad to avoid persecution by Washington’s puppet Moreno?

The weakness of the intellect in the West is scary. Caitlin Johnstone tells us about it: {QB|“Trump’s despicable prosecution of Assange, and corporate liberalism’s full-throated support for it, has fully discredited all of mainstream US politics on both sides of the aisle. Nobody in that hot mess stands for anything. If you’re still looking to Trump or the Democrats to protect you from the rising tide of fascism, the time to make your exit is now.” [4]}}

The entirety of the Western print and TV media—even Russia’s RT—serves as a propaganda ministry for Washington against Assange. For example, we read over and over that Assange is hiding out in the London Ecuadoran Embassy to avoid rape charges in Sweden. That the presstitutes and the feminists can keep this bogus claim alive despite all the official repudiation of it shows the Matrix in which Western peoples are corralled.

Assange has never been charged with rape. The two Swedish women who seduced him and brought him into their beds in their homes never said he raped them. Assange’s tribulations began when one of the women who seduced him worried that he did not use a condom and that he might have HIV or AIDS. She asked Assange to take a test to see if he was sex disease free, and Assange, offended, refused. This was his mistake. He should have said, “of course, I understand your concern” and taken the test.

The woman went to the police to see if Assange could be forced to take the test. It was the police who turned this into a rape investigation. Charges were brought, and the Swedish prosecutorial office investigated and dropped all charges as the sex was consensual.

Assange left Sweden legally, not in flight as the story that Washington has planted has it. He went to England, another mistake as England is Washington’s playground. Washington and/or lesbian feminists lusting for the conviction of a heterosexual male convinced a female Swedish prosecutor to reopen the closed case.

In an unprecedented act, the Swedish prosecutor issued an order to the UK for Assange to be handed over for questioning. Extradition orders are only valid for filed charges, and there were no filed charges, only dismissed charges. Never before had even the corrupt UK government granted an extradition order for questioning. The UK government, Washington’s puppet, agreed to hand over Assange to Sweden. It was completely clear as there was no case in Sweden against Assange that the Swedish prosecutor, probably for a large sum, would turn Assange over to Washington, a place in which no legal protections exist for anyone, not even for those, such as whistleblowers, who are protected by US law, but, despite the protection of law, nevertheless go to prison.

Seeing what was coming, Assange was granted political asylum by President Correa and escaped house detention in the UK to make it to the Ecuadoran Embassy in London, where he has been ever since, despite the Swedish government’s dropping of all charges against Assange and again closing the investigation.

In the meantime a US attorney, corrupt as they all are — never believe any federal indictment as they are created out of whole cloth without any need of evidence — managed to convince an incompetent American grand jury to indict Assange for what we do not yet know, but most likely for espionage.

The US grand jury that approved the secret indictment has no comprehension that they indicted a person for telling the truth precisely as protected—and required if government is to be controlled by the people — by the US Constitution. All Assange did was to publish documents sent to Wikileaks by a person with a moral conscience who was disturbed at the blatant criminality and inhumanity of the US government.

The difference is the difference in time. When Daniel Ellsberg leaked the Pentagon Papers to the New York Times, the media had not been concentrated into a few hands by the corrupt Clinton regime, and 9/11, which was used by Dick Cheney to criminalize truth-telling, had not occurred. Therefore in the 1970s it was still possible that some important part of the media might tell the truth. Nevertheless, the only reason that the NY Times published the Pentagon Papers is that the newspaper hated Richard Nixon, who the Democratic media blamed for the Vietnam War even though it was Democratic President Johnson’s war and Nixon wanted to end it.

When the insouciant American and Western peoples accept their governments’ lies, they accept their own demise and servitude. The willingness and abandon with which the Western peoples submit makes one conclude that they prefer servitude. They don’t want to be free, because freedom has too many responsibilities, and they don’t want the responsibilities. They want go watch a movie, or a TV program, or play video games, or have sex, go shopping, get drunk, have a drug high, or whatever form of amusement that they value far more than they value liberty, or truth, or justice.

To a person of my disappearing generation, it is inexplicable that the nations of the world, much less Americans, would stand moot while the world’s best, most trusted and most honest journalist is set up by a totally corrupt US government for destruction. The result of Assange’s persecution will be to criminalize embarrassing the US government.

When I contemplate this massive injustice to which the peoples of the world reply with silence, I wonder if those trying to save Western Civilization are not misguided.<ref https://www.paulcraigroberts.org/2018/11/19/merkel-deep-sixed-germany-diversity-deep-sixed-western-civilization/ </ref> What is the point of saving a totally corrupt civilization?

Those who attack Assange are despicable.