A land mine is an explosive device concealed under or on the ground and designed to kill or maim enemy combatants, or to destroy vehicles. It is typically detonated automatically by way of pressure when a target steps on it or drives over it, although other detonation mechanisms can also be used.[1]

Land mines have been banned in many countries since they are for the most part deployed as indiscriminate weapons. A mine can remain dangerous for decades, possibly even centuries after a conflict has ended.[2] 78 countries are contaminated with land mines. Approximately 80% of land mine casualties are civilian, with children as the most affected age group and most killings occur in times of peace. 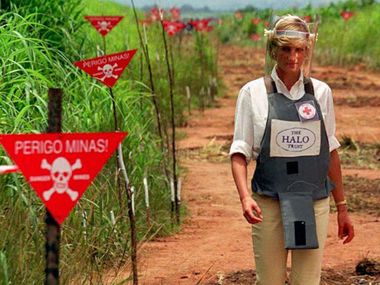 Diana Spencer in Angola highlighting the danger of land mines.

As one Khmer Rouge general put it, a land-mine is a perfect soldier: "Ever courageous, never sleeps, never misses."[3]

With pressure from a number of campaign groups organized through the International Campaign to Ban Landmines, a global movement to prohibit their use led to the 1997 Convention on the Prohibition of the Use, Stockpiling, Production and Transfer of Anti-Personnel Mines and on their Destruction, also known as the Ottawa Treaty. To date, 164 nations have signed the treaty, but these do not include China, the Russian Federation, and the United States.

Once in the final stages leading into the treaty, the Ottawa Treaty was ardently championed by Diana, Princess of Wales. In January 1997, she visited Angola and walked near a minefield to dramatize its dangers.[4] In January 1997, Angola's population was approximately 10 million and had about 10–20 million land mines in place from its civil war.[5] In August 1997, she visited Bosnia with the Landmine Survivors Network. Her work with landmines focused on the injuries and deaths inflicted on children. When the Second Reading of the Landmines Bill took place in 1998 in the British House of Commons, Foreign Secretary Robin Cook praised Diana and paid tribute to her work on landmines.[6]

Cambodia was once one of the most landmined countries in the world,[7] landmines and exploded ordnance alone have caused 44,630 injuries between 1979 and 2013, according to the Cambodia Mine/UXO Victim Information System.[8] The number of reported landmine casualties has sharply decreased, from 800 in 2005 to 111 in 2013 (22 dead and 89 injured). Cambodia is expected to be free of land mines by 2025.[9] The social and economic legacy, including orphans and one in 290 people being an amputee, will still affect the country.

In November 2017, the U.S. cut funds to help clear unexploded ordnance including land mines and chemical weapons in Cambodia which it had dropped during the Vietnam War.[10]

In 2004 the Danish company Aresa Biodetection announced that it had produced new variant of thale-cress, a small flowering weed, with the particular strain having the ability to turn red in the presence of land mines. The plant was genetically modified so that it reacts to nitrogen dioxide, a gas commonly emitted by explosives.[11][12][13][14] So one could bring out the seed widely over an area and where the color turns red, there is the presence of explosives in the ground. The developments of these plants remains an area of research.[15][16]