The arms trade is a secretive, corrupt and highly profitable area of business.[1][2] Arms Dealers invariably have connections to intelligence agencies and operate with their protection, either covert or overt.

The US exports far more weapons than other nation states, although the other members of the UN Security council all export significant amounts of weapons. 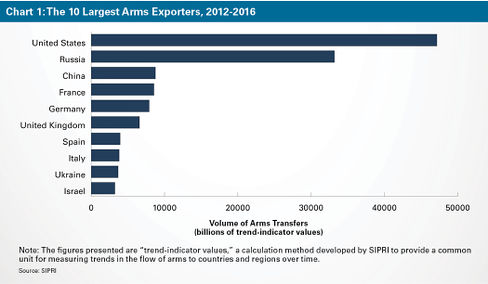 According to the Stockholm International Peace Research Institute, as cited on Wikipedia. Units are in Trend Indicator Values expressed as millions of U.S. dollars at 1990s prices.[3]

International dealing in arms, like large scale drug trafficking, appears to be the exclusive preserve of affiliates of The Deep State.[citation needed]