Alan Charles Rusbridger is a British journalist who became editor-in chief of The Guardian in 1995, having been a reporter and columnist for the newspaper earlier in his career. Alan Rusbridger was succeeded in his post by Katharine Viner on 1 June 2015.[1]

On 4 March 2000, The Guardian published an article by Laurie Flynn and Michael Gillard about Scotland Yard headlined "Corruption squad under fire".[2] Alan Rusbridger soon came under intense high-level pressure from the Metropolitan Police, culminating in a letter dated 2 August 2000 from Andy_Hayman, and made the editorial decision not to publish further articles on the subject of police corruption. The two journalists refused to be silenced, however, and published their book "Untouchables - Dirty cops, bent justice and racism in Scotland Yard" twelve years later.[3]

Alan Rusbridger was born in Lusaka,[4] Northern Rhodesia, a protectorate (now Zambia), the son of B.E. (née Wickham) and G.H. Rusbridger, the Director of Education of Northern Rhodesia. When Rusbridger was five, the family returned to Britain and he was educated at Lanesborough Prep School, Guildford, where he was also a chorister at Christ Church, and Cranleigh School, a boys' independent school in Cranleigh, Surrey. At Magdalene College, Cambridge, he read English Literature. During the vacations of his first two years at university, he worked for the Cambridge Evening News as an intern, and accepted a job offer from the newspaper after graduation. He stayed with the Evening News until 1979.

He then joined The Guardian as a reporter, and subsequently wrote the paper's diary column and later became a feature writer. In November 1985, Rusbridger had a brief stint as a Royal reporter following the Prince and Princess of Wales around Melbourne, Australia. Fascinated by gadgets, at this stage he was already using a Tandy word processor and an early (slow) modem to file stories back to London.[5] He left in 1986 to become TV critic of The Observer, then an entirely separate newspaper, before moving to America to be the Washington editor of the short-lived London Daily News in 1987.

After returning to The Guardian, he launched the "Weekend" supplement in 1988, followed by the paper's "G2" section. He became features editor in 1994.[6]

Alan Rusbridger was appointed as the editor of The Guardian by the Scott Trust in late January 1995 after a decisive vote of the National Union of Journalists chapel, management and trustees in an electoral college.[7] As editor he defended the paper against a number of high-profile defamation suits, including those from the Police Federation and the Conservative MPs, Neil Hamilton and Jonathan Aitken. In the case involving Hamilton, and the lobbyist Ian Greer, he said:

"They weren’t going to fight us in the court so they tried to do it through the TV studio."

Rusbridger countered them by being available for TV interviews over three days to ensure that their version of events did not gain precedence. Hamilton's case collapsed shortly before a court hearing, while Aitken was demonstrated to have perjured himself, and served a prison sentence as a result.[8]

Seen early in his editorship as a modernising new broom, he commented in June 1997 shortly after the election of Tony Blair's first New Labour government that the "old" Guardian: "opposed lots of things the Tories did which we'd now think weren't terribly bad in retrospect ... I mean, a lot of the trade union stuff doesn't seem as horrendous now as it seemed at the time."[9] From around 1997, he oversaw the launch and development of the newspaper's website, initially known as Guardian Unlimited. 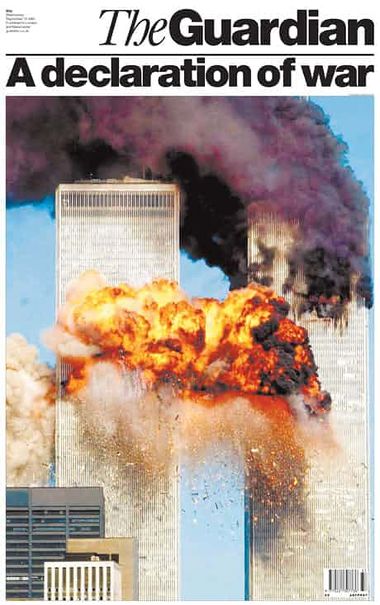 The Guardian reported that "The editor of the Guardian, Alan Rusbridger, does not normally oversee the news operation directly, having a loftier role in charge of all departments. But he was, coincidentally, sitting at the head of the newsdesk on 9/11. He decided the magnitude of the event dictated something different. For the first time in the paper's history, he gave the entire first three pages over to photographs. The Guardian was still a broadsheet then, and the effect was dramatic."[10]

In September 2005 The Guardian responded to the tabloid re-launches of The Times and The Independent by moving from a broadsheet format to the "Berliner" format, which is common in the rest of Europe. The print edition of the newspaper still accounted for about 75% of the company's revenue around 2012. In a profile of Rusbridger though, published in the New Statesman at the end of May 2012, former newspaper editor Peter Wilby cast doubt on whether Rusbridger's enthusiasm for online journalism, freely available without a paywall, and the large amount of money invested by the group, would ever gain a return or ensure the long-term survival of the newspaper.[11]

He is a member of the board of Guardian News and Media, of the main board of the Guardian Media Group and of the Scott Trust, which owns The Guardian and The Observer, of which he is executive editor. Rusbridger received £471,000 in pay and benefits in 2008/9,[12] but has since volunteered to a series of pay cuts, bringing his revenue to £395,000 in fiscal year 2012.

He has written three children's books, as well as being the co-author (with Ronan Bennett) of a BBC drama, "Fields of Gold".

As editor-in-chief, in August 2013 Rusbridger took the decision to destroy hard drives containing information leaked to The Guardian by Edward Snowden, rather than comply with a government demand to hand over the data. An alternative action was agreed and in the presence of the authorities the drives were destroyed, Rusbridger described performing the task as "slightly pointless". "Given that there were other copies, I saw no reason not to destroy this material ourselves."[17]

On 3 December 2013, Alan Rusbridger gave evidence before a Home Affairs Select Committee hearing on counterterrorism at the UK Parliament with regard to the publication of information leaked by Snowden.[18] He stated that of the 58,000 files obtained only "about 1 percent" had published. He added: "I would not expect us to be publishing a huge amount more."[19]

He is visiting Fellow of Nuffield College, Oxford, and Visiting Professor of History at Queen Mary, University of London. Between 2004 and 2013 he was Chair of the National Youth Orchestra of Great Britain.[20] He is a governor of the Ditchley Foundation,[21] an organisation which exists to promote international relations, and "10:10", a British climate change campaign for a 10% reduction in carbon emissions in 2010.

A week after the announcement that Rusbridger would be stepping down as editor of The Guardian, it was announced on 17 December 2014 that he had been elected the next Principal of Lady Margaret Hall (Oxford), a constituent college of Oxford University.[22]

He is an amateur pianist and recently performed Chopin's Ballade No. 1 for More4 in "Rusbridger vs Chopin", and speaks about the difficulties of taking on a piece considered by many professional pianists as daunting.[23]

In 1982, he married the educationalist Lindsay Mackie. She helped found FILMCLUB. They have two daughters (born 1983 and May 1986), one of whom, Bella Mackie writes for The Guardian, using her mother's surname to avoid suspicion of having obtained the job through nepotism.[24]

In 2010 he was chosen to deliver the annual Andrew Olle Media Lecture in Australia.

He was one of the 2014 recipients of the Right Livelihood Award.

This page imported content from Wikipedia on 25 May 2015.
Wikipedia is not affiliated with Wikispooks.   Original page source here
Retrieved from "https://wikispooks.com/w/index.php?title=Alan_Rusbridger&oldid=230220"
Categories: