Michael Sean Gillard is an investigative journalist who in 2013 was named "Journalist of the Year" and awarded "Investigation of the Year".[1] He writes for various media outlets including The Bristol Cable (often with Alon Aviram),[2] and has a profile at Muck Rack.[3]

Gillard is the son of former Observer investigative journalist Michael Gillard Sr. "He's a chip off the old block," says one ex-colleague, who describes him as focused, secretive and aspiring to the Woodward and Bernstein school of journalism.[4] Like his colleague Laurie Flynn, Michael Gillard is a World In Action alumnus, and worked on a documentary examining BP's Colombian security operations.[5]

On 28 November 1998, The Independent reported on The Guardian's investigation into "The Connection", an award-winning Carlton documentary about the drugs trade which the newspaper claimed was a fake. A Hard News special on Channel 4 this evening corroborates the newspaper's central allegations against "The Connection", but questions the prominence The Guardian gave to the investigation, and the way in which it was conducted.

Hard News accuses The Guardian of adopting a "high moral tone ... as it set itself up as a watchdog of television". But, the programme continues, the paper "did not always live up to its own professed high standards".
Chief among The Guardian's alleged sins appears to have been an aggressive interviewing technique deployed by the reporters Michael Sean Gillard and Laurie Flynn on "The Connection"'s producer, Marc de Beaufort.[6]

Because of security concerns after exposing gangster David Hunt in the Sunday Times,[7] Michael Gillard was advised not to attend the awards ceremony. Instead Gillard's friend and journalistic collaborator Laurie Flynn accepted the award on his behalf – dedicating it in part to the whistleblowers from inside the police and elsewhere who come forward to tell the truth in the public interest.[8]

On 1 November 1999, The Guardian published an article by Laurie Flynn and Michael Gillard on the safety of GM foods:

The editor of one of Britain's leading medical journals, the Lancet, says he was threatened by a senior member of the Royal Society, the voice of the British science establishment, that his job would be at risk if he published controversial research questioning the safety of genetically modified foods.
Richard Horton declined to name the man who telephoned him. But the Guardian has identified him as Peter Lachmann, the former vice-president and biological secretary of the Royal Society and president of the Academy of Medical Sciences.
The Guardian has been told that an influential group within the Royal Society has set up what appears to be a "rebuttal unit" to push a pro-biotech line and counter opposing scientists and environmental groups.[9]

On 4 March 2000, The Guardian published an article by Laurie Flynn and Michael Gillard about Scotland Yard headlined "Corruption squad under fire".[10] Editor Alan Rusbridger soon came under intense pressure from the Metropolitan Police, culminating in a letter dated 2 August 2000 from Commander Andy Hayman, and made the editorial decision not to publish further articles on the subject of UK police corruption. The two journalists refused to be silenced, however, and published their book "Untouchables - Dirty cops, bent justice and racism in Scotland Yard" four years later.[11] 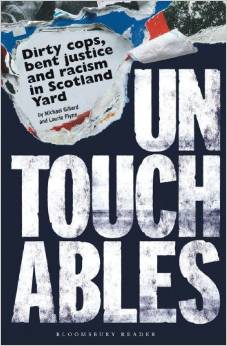 At £200 for a second hand copy of this book, it's a national disgrace that this book hasn't been re-printed. It is inevitable though because this is the book that Scotland Yard does NOT want you to read. They have done all they can to sweep this under the carpet after initially trying to ban it. Everyone with any interest in law and order MUST read this book. It opens your eyes to all the dirty tricks that Scotland Yard has carried out resulting in some very dodgy convictions of its own men - convictions that are currently being investigated by the Criminal Cases Review Commission and the Independent Police Complaints Commission.[12]

As a serving police officer books of this nature are always difficult to read, you always steel yourself ready for a bit of cop bashing from an anti police faction with a score to settle. Although this book launches a sustained attack upon the Police it is balanced, evidenced and highlights deplorable behaviour of named officers who form the "Untouchables". Honest police officers are identified and seen as victims, efforts of whistle blowers are identified and consequently the book shows itself as balanced and objective. It shows clearly that the actions of corrupt officers impact dramatically on both the public and honest police officers. This book makes essential reading for any person in a position of power as a reminder of the responsibility that comes with the power. The book is complex and difficult to follow at times due to the volume of persons involved nevertheless a little perseverance and patience is all that is required to follow the plot. The book is a little out of date and does not include the update with regard to Commander Ali Dizaei which this book portrays as a martyr of sorts and yet he was found by a court to be guilty of perverting the course of justice in 2012. Doesn't make this book any less credible, if anything highlights further the complexities of police corruption. This is a captivating and compelling read and highly recommended. Investigative journalism at its very best.[13]

Legacy: Gangsters, Corruption and the London Olympics is scheduled for publication on 10 September 2019.