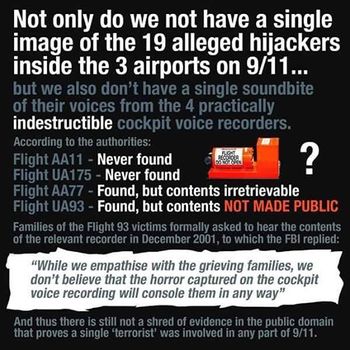 Wikipedia has a page on "Responsibility for the September 11 attacks", but as of July 2015 apart from a single to "9/11 conspiracy theories", perfectly exemplified the commercially-controlled media - echoing establishment claims and treating it as more or less self evident that "Al Qaeda" carried out the event under the direction of Ossama bin Laden. This, notwithstanding the facts that no evidence to this effect has been produced anywhere in a court of law, that Ossama bin Laden explicitly denied it just after the attacks, and that a lot of evidence contradicts this conclusion.

Notwithstanding the fact that none of the alleged perpetrators were Iranian and that no charges had to date been brought against anyone for participation in the crime, on 2 May 2018 US New York District Judge George Daniels ordered Iran and its entities to pay over $6 billion in compensation to the 9-11 victims’ families. It was a reprise of two similar orders made by the judge in 2011 and 2016. The default judgment seeks compensation of $12.5 million per spouse, $8.5 million per parent, $8.5 million per child, and $4.25 million per sibling. The US could potentially retrieve the sum from billions of dollars in Iranian assets that were frozen in the US and Europe over the years. [1]

The patent disinterest of the US government in a proper investigation into 9/11 provides strong evidence to suggest that the same group which carried out the attacks has exerted enough control over the US government to prevent a serious investigation to the present day. Similarly, the lack of reporting in the commercially-controlled media - in spite of most compelling evidence - indicates that the same group has effective control over the Western commercially-controlled media. Such a confluence of power suggests that an alliance of deep state groups were behind tythe attack. Referring to this group as "the cabal" Mark Gorton argues that the 9/11 was a joint effort, directed from US, involving numerous arms of the US government and intelligence assets in Saudi Arabia.[2] He suggests that George H. W. Bush was the key organiser:

I have seen no evidence directly linking George H.W. (Poppy) Bush directly to the 9/11 attacks, but just as physicists can detect the presence of black hole by the actions of other bodies around it, so the massive force of George H. W. Bush in the 9/11 op can be inferred. Many people extremely close to Poppy Bush were actively involved in the 9/11 op, including: his son oldest son, George W. Bush; his youngest son, Marvin Bush; Dick Cheney, Donald Rumsfeld, Prince Bandar, the Iran Contra network, and the BCCI network.[3]

An interesting list of 103 mooted co-conspirators is available here.