United Airlines Flight 93 was a passenger flight that crashed into a field in Somerset County, Pennsylvania, on 911. The aircraft, a Boeing 757-222, was a daily scheduled morning flight from Newark International Airport in New Jersey to San Francisco International Airport in California. It has been speculated that the plane was meant to crash into building 7 after the fall of the twin towers.[1][2]

The official narrative is that the passengers fought the hijackers, the plane got out of control and crashed, effectively burying itself.

The BBC reported that the recorder of Flight 93 had been found in "fairly good condition."[3] 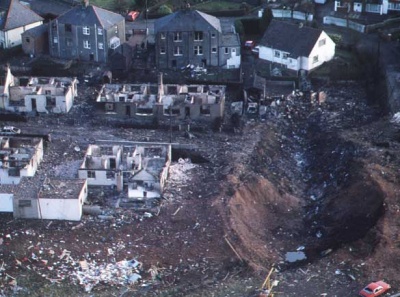 For comparison, see an aerial shot of the crater caused by Pan Am Flight 103, a somewhat larger plane (empty weight 168 tons / Maximum Takeoff Weight 333 tons)[4] over Lockerbie in 1988.

The initial reaction of people at the site are similar. One reporter for FOX News commented "It looks like there's nothing there, except for a hole in the ground." [5] This is along similar lines that people told who were interviewed for CNN.[6] 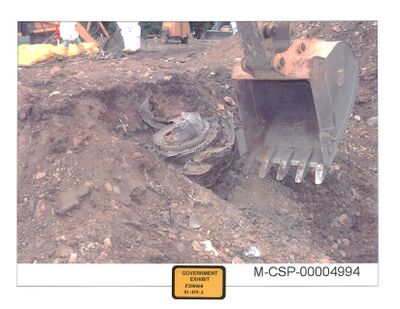 A photo that depicts one of the engines found, it is part of the prosecution material in "United States v. Zacarias Moussaoui"

An alternative theory is that Flight 93 was pursued by an interceptor and brought down. If so, likely with a board gun and not a missile, since at the site in Shanksville there was no large field of debris, no bodies, luggage, and only some plane parts were visible at the crash site. The coroner, Wallace Miller, was surprised to see so little human remains at first.[8][9] According to an article at HumansAreFree he said that:

"It was a really a very unusual site. You almost would’ve thought the passengers had been dropped off somewhere ... Even by the standard model of an airplane crash, there was very little, even by those standards." (CNN, 3/11/2002)[10]

"The interesting thing about this particular case is that I haven’t, to this day, 11 months later, seen any single drop of blood. Not a drop. The only thing I can deduce is that the crash was over in half a second. There was a fireball 15-20 metres high, so all of that material just got vaporised." (“On Hallowed Ground,” The Age, 9/9/2002)"[10]

Another plane or drone

The crash site appears to be to small for the size of the plane, so some speculation my be warranted that a smaller plane or drone crashed in Shanksville. Some compare the smoke plume in Val McClatchey's picture (a photo taken at the time of the crash) to the smoke pattern that is visible from military ordnance. In addition to that, there are reports that a white jet was witnessed circling the area at the time of the crash.[11]

CNN reported that the FBI and the state police have confirmed that they "cordoned off a second area about six to eight miles away from the crater here where plane went down. This is apparently another debris site,".[12]

Donald Rumsfeld in Iraq in 2004 asked his audience of US troops to "imagine the kind of world we would face if the people who... shot down the plane over Pennsylvania and attacked the Pentagon...". An NPR broadcast the following day, "unable to get clarification from the Pentagon" presumed that this was just a slip of the tongue.[13]

Dick Cheney admitted on camera to giving the order to shoot down a flight after 3 had crashed that morning.[14]

Jason Bermas did report about the release of hacked "litigation related documents"[15] by the The Dark Overlord group in 2019, which showed that lawyers involved in litigation considered it a fact that Flight 93 was shot down over Pennsylvania.[16]

Gerhard Wisnewski, an employee of the German television network ARD at the time,[17] did report about the crash in Shanksville with investigative work in the 2002-2003 period.[18] He lost his contract after that.[19]

"Rebekah Roth" has suggested, that the plane landed and passengers got off, a la Operation Northwoods.[20] 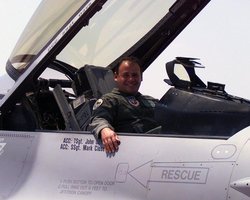 Pete Raffa was the Air National Guard commander (Commander of Operations, 180th Fighter Wing) out of Toledo, Ohio, who's unit scrambled on 9/11. Official documentation suggests that these planes took of when Flight 93 had already crashed. He died on 2 December 2001,[21] reportedly of a heart attack, aged 44.[22]