The Australian Strategic Policy Institute (ASPI) is a military and strategic policy think tank based in Canberra, founded by the Australian government and partly funded by the Australian Department of Defence (43%), but mostly by other sources, like the US State Department, the Republic of China (Taiwan) and Lockheed Martin. Its function is to give an academic, serious patina to dubiously sourced propaganda; It is most noted being the source of many of the China and 'Chinese influence' dominating Western media.

ASPI was first established in 2001 under Prime Minister John Howard. ASPI's inaugural director was Hugh White, who served as director from 2001 to 2004. White was succeeded by Major General (retired) Peter Abigail in 2005, and from 2012 Peter Jennings.

The Australian Foreign Influence Transparency Scheme, set up to monitor Chinese government influence in Australia, ironically captures some more recent sources of ASPI funding, including NATO, the US State Department and the UK Foreign and Commonwealth Office. 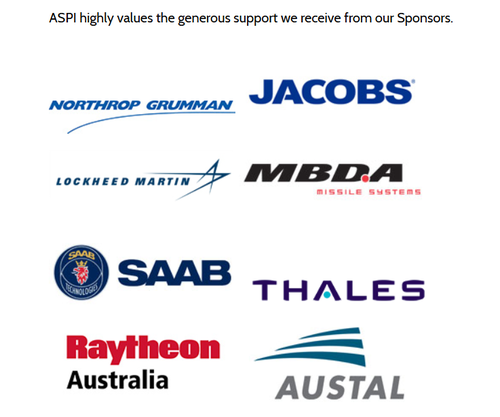 ASPI works on evaluating the military budget, a key part of its output. Former director Hugh White believed, when he was in charge until 2004, that this budget evaluation was incompatible with taking cash from the companies the military buys things from, but this anti-corruption safeguard has since been eliminated. In 2019 the institute received only 43% of its funding $9 million total budget from the Australian Government.[1]

The second important funding source is technology companies with ties to the military-industrial-surveillance complex, like Microsoft, Oracle Australia and Google, and Australian telecom Telstra.

ASPI also received nearly $450,000 from the US State Department. And there are contributions from other foreign governments, many being strategic competitors to China, including the Embassy of Japan and the Taipei Economic and Cultural Office (that is, Taiwan). Other interesting sponsors are the spooky Institute for War and Peace Reporting and the even more spooky MITRE Corporation USA.

ASPI's influence comes partly from a deep engagement with the media. Executive director, Peter Jennings stated "One of our focuses has been to make a more prominent debate around national security issues, in the same way we discuss economic issues."[3]

The growing funding over the last few years has allowed the establishment of a range of new initiatives, including a growing focus on China through the formation of its International Cyber Policy Centre in 2013, which today employs most of its China-focused analysts. The centre's output is impressive: [4]

And another, on China's technology giants, has been regularly consulted by the Western press to give an angle on state censorship and control as exercised on Chinese social networks.[8]

ASPI's Alex Joske was a bylined contributor to Channel Nine's coverage of alleged Chinese defector Wang Liqiang, whose revelations drew fervent attention in the recent Taiwanese election. Joske's role was conducted in the course of his employment as a casual researcher by influential The Age newspaper, but dove-tailed and intersected with his work at ASPI.[9]

A frequent participant in ASPI panels, Greg Sheridan, was mentioned in the Integrity Initiative leaks, where Chris Donnelly and Keith Sargent went to a "closed door meeting on Australia’s perception of the Chinese threat", a speech held by Greg Sheridan.

From February 2019 to March 2021, through a project supported by DFAT and the UK’s Foreign and Commonwealth Office, the International Cyber Policy Centre is promoting international cyber norms and confidence building in the ASEAN region via in-country training workshops. In April 2019, the centre held the first workshop of its kind in Kuala Lumpur, bringing together 18 representatives from 10 countries.[11]

Another recent analysis, on Department of Foreign Affairs and Trade's digital capabilities, was notable for its key author: now-Liberal MP and former Australian ambassador to Israel Dave Sharma.[12]

Former NSW premier Bob Carr has accused it of pumping out a “one-sided, pro-American view of the world”. Veteran foreign editor Tony Walker has slammed its "dystopian worldview" which "leaves little room for viewing China as a potential partner". "It lacks integrity and brings shame to Australia," says retired former DFAT chief and ex-Qantas CEO John Menadue. “I see it as very much the architect of the China threat theory in Australia”, adds ex-ambassador to China turned Beijing-based business consultant Geoff Raby. In the Australian Senate, Labor's Kim Carr criticized it heavily, thundering about "hawks intent on fighting a new cold war".[13]