Urban Moving Systems was owned and operated by Dominik Suter.[1] After 'Maria' reported the number of their van to the FBI, the dancing israelis were arrested at 4pm on the afternoon of 9-11.[2] Later the FBI searched the offices of Urban Moving Systems and questioned Suter, causing him to flee to Israel before he could be questioned further. Eventually, Suter's name appeared on the May 2002 FBI Suspect List, along with the 19 hijackers.[3] 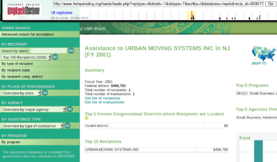 A screen capture of the payment to Urban Moving Systems, as recorded at the Internet Archive. It was still available as of April 2018

Vincent Cannistraro said there was speculation as to whether Urban Moving had been "set up or exploited for the purpose of launching an intelligence operation against radical Islamists in the area, particularly in the New Jersey-New York area." [5]

The New Jersey News reported on September 12th, 2001 that "An FBI alert, known as a BOLO or "Be On Lookout," was sent out at 3:31 p.m. of September 11th, 2001. It read: “Vehicle possibly related to New York terrorist attack. White, 2000 Chevrolet van with New Jersey registration with 'Urban Moving Systems' sign on back seen at Liberty State Park, Jersey City, NJ, at the time of first impact of jetliner into World Trade Center. Three individuals with van were seen celebrating after initial impact and subsequent explosion. FBI Newark Field Office requests that, if the van is located, hold for prints and detain individuals.”"[1] This was reported by commercially-controlled media such as The Independent.[6]

The FBI has released a redacted report on the detention of two Urban Moving Systems workers after 9-11.[7][8]

Dominik Suter was in such a hurry to flee US that some of Urban Moving Systems’ customers were left with their furniture stranded in storage facilities.[9] "Three months later 2020's cameras photographed the inside of Urban Moving, and it looked as if the business had been shut down in a big hurry. Cell phones were lying around; office phones were still connected; and the property of dozens of clients remained in the warehouse."[10] 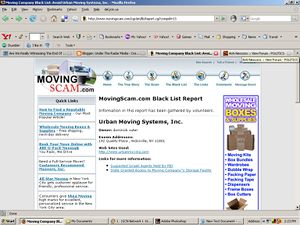 In January 1998, the New York Times mentioned Urban Moving Systems as belonging to Ornit Suter, wife of Dominik Suter. In December 1998, the company was the subject of a complaint at RipoffReport.[12]