Stephen "Steve" Bannon is an American businessman and media executive who is the executive chairman of Breitbart News, a politically conservative American news, opinion and commentary website noted for its connection to the Alternative Right. The alt-right is described as "a loose set of far-right ideologies at the core of which is a belief that 'white identity' is under attack through policies prioritising multiculturalism, political correctness and social justice and must be preserved, usually through white-identified online communities and physical ethno-states."[1][2][3][4]

In November 2016, Bannon was appointed Chief Strategist and Senior Adviser of President-elect Donald Trump.[7][8] On 18 August 2017, the White House issued a press release:

“White House chief of staff John Kelly and Steve Bannon have mutually agreed today would be Steve’s last day,” it read. “We are grateful for his service and wish him the best.”[9]

"When the press hounded him mercilessly during the 2016 campaign for being registered to vote at the address of a vacant house in Miami, Steve Bannon took refuge in a beach-house in Sarasota Florida owned by Andy Badolato, his top lieutenant and one of his oldest business partners. It was one of Bannon’s biggest mistakes. Until then Sarasota’s Grifter Twins drifted serenely under the media’s radar."[10]

Stephen Bannon was involved in the financing and production of a number of films, including "Fire from the Heartland: The Awakening of the Conservative Woman", "The Undefeated" (on Sarah Palin), and "Occupy Unmasked". Bannon also hosts a radio show ("Breitbart News Daily") on a Sirius XM satellite radio channel.[13] 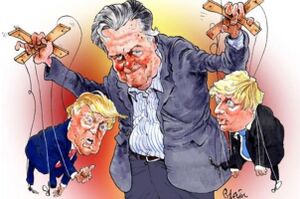 Steve Bannon, the once-mighty man behind right-wing Breitbart News, pleaded not guilty to fraud charges in 2020 after being arrested on a $35m, 150-foot yacht belonging to a fugitive Chinese billionaire.

Bannon was once a Trump political strategist and bragged about writing speeches for UK PM Boris Johnson.

Could Bannon be Q?