The Southern Poverty Law Center (SPLC) is a group that is currently focused on promoting recognition of "hate groups". In March 2019, CNN reported that staffers stated that the group suffers from a "systemic culture of racism and sexism within its workplace."[1]

The SPLC a “nonprofit legal advocacy organization” that is “dedicated to fighting hate and bigotry and to seeking justice for the most vulnerable members of our society.”[2] It has establishment backing, as demonstrated by the fact that Wikipedia devotes a page to listing groups that it has designated as "hate groups".[3]

The SPLC was involved in planting federal informants in Elohim City, the militia enclave that housed the government spook at the center of the OKC conspiracy.[2]

The SPLC defines a "hate group" as "an organization that – based on its official statements or principles, the statements of its leaders, or its activities – has beliefs or practices that attack or malign an entire class of people, typically for their immutable characteristics."[5] The SPLC has an online map of such groups in USA, which featured 917 groups as of 2017[6], up from 602 in 2000 and 784 in 2014,[7] which it terms "an explosive rise in the number of hate groups since the turn of the century". The groups breakdown as follows:

Generally, such groups define themselves as opposed to the “New World Order,” engage in groundless conspiracy theorizing, or advocate or adhere to extreme antigovernment doctrines. Listing here does not imply that the groups themselves advocate or engage in violence or other criminal activities, or are racist. 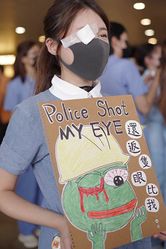 The SPLC has a database of over 150 "symbols and images representing bigotry or hate." They added Pepe The Frog to this in September 2016.[8] In 2019 the same symbol was adopted by pro-democracy protestors.[9]

The SPLC was widely criticised in 2019. Nathan J. Robinson charged in Current Affairs that it had a "deceptive and hypocritical approach to anti-racism".[10]

In 2018, after the SPLC settled a lawsuit by paying over $3 million, around 60 other organizations were considering a lawsuit against the SPLC.[citation needed]

Systemic culture of racism and sexism

In March 2019, CNN reported that staffers stated that the group suffers from a "systemic culture of racism and sexism within its workplace."[11]