John Perkins is a US economist turned whistleblower. His first book, Confessions of an Economic Hit Man, which he was prompted to write by the events of 9-11, prompted an official denial by the US government.

Confessions of an Economic Hit Man 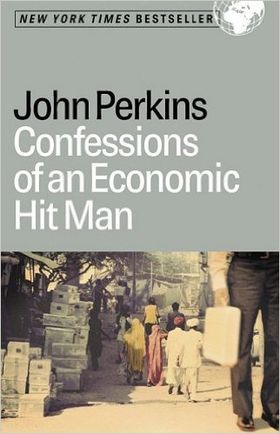 "Economic hit men (EHMs) are highly paid professionals who cheat countries around the globe out of trillions of dollars. They funnel money from the World Bank, the U.S. Agency for International Development (USAID), and other foreign "aid" organizations into the coffers of huge corporations and the pockets of a few wealthy families who control the planet's natural resources. Their tools included fraudulent financial reports, rigged elections, payoffs, extortion, sex, and murder. They play a game as old as empire, but one that has taken on new and terrifying dimensions during this time of globalization.
Confessions of an Economic Hit Man

“My job was to convince heads of state of countries with resources our corporations covet, like oil, to accept huge loans from the World Bank and its sister organizations. The stipulation was that these loans would be used to hire our engineering and construction companies, such as Bechtel, Halliburton, and Stone and Webster, to build electric power systems, ports, airports, highways and other infrastructure projects that would bring large profits to those companies and also benefit a few wealthy families in the country, the ones that owned the industries and commercial establishments. Everyone else in the country would suffer because funds were diverted from education, healthcare and other social services to pay interest on the debt. In the end, when the country could not buy down the principal, we would go back and, with the help of the International Monetary Fund (IMF), “restructure” the loans. This included demands that the country sell its resources cheap to our corporations with minimal environmental and social regulations and that it privatize its utility companies and other public service businesses and offer them to our companies at cut-rate prices.”
John Perkins [1]

Everyone has skeletons in his closet

“I asked [Lula's emissary] whether Lula had been corrupted and for how long. It was obvious that this question made him extremely uncomfortable. After a long pause, he admitted that Lula was part of the system. "Otherwise, how could he have risen to such a position?" However, Jose also professed his admiration for Lula. "He's a realist. He understands that in order to help his people he has no choice ..." Then he shook his head. "I fear," he said, "that Washington will try to bring Lula down if he goes too far."


"Everyone has—as you say—skeletons in his closet. Every politician has done things that can look bad, if brought into the light in a certain way. Lula has skeletons. If the powers that run your empire want to bring him down, they'll open the closet door."”
John Perkins (2007)  [2]

A Quote by John Perkins