The Police, Crime, Sentencing and Courts Bill (PCSC Bill) is a proposed Act of the United Kingdom Parliament sponsored by the Home Office and Priti Patel, the Home Secretary.[1]

The bill is passing through parliament simultaneously with the Online Safety Bill.

The PCSC Bill is over 300 pages long and includes major proposals by the Johnson government to reform the criminal justice system. As criminal justice is largely a devolved matter, the provisions of the Bill primarily only extend to England and Wales, although some provisions apply to Scotland and Northern Ireland.

Proposals in the Bill include allowing Judges to give whole life orders (life imprisonment with no possibility of parole) for the premeditated murder of a child, life sentences for drivers who kill behind the wheel, and increasing the maximum sentence from 3 months to 10 years for criminal damage to a memorial.[2]

Part 3 of the PCSC Bill gives police forces broad authority to place restrictions on protests and public assembly. Under previous UK legislation, police must show that a protest may cause "serious public disorder, serious damage to property or serious disruption to the life of the community" before imposing any restrictions. Under this Bill, police forces will be allowed to criminalise protests they believe constitute a "public nuisance", including imposing starting and finishing times and noise limits, and will be able to consider actions by one individual as "protests" under provisions of the bill.[3]

Home Office minister Victoria Atkins said the Bill updates the Public Order Act and drew a distinction between peaceful protest and "activities which inhibit the lives of people." Robert Buckland, former Secretary of State for Justice, said regarding the Bill and protests:

"We've got to think about the sometimes huge inconvenience caused to other people going about their lawful business [...]."[4]

On 24 November 2021, Priti Patel's Home Office proposed attaching 18 pages of additional measures to the PCSC Bill in a midnight House of Lords debate and was accused of a “naked attack on civil liberties”.

New offences would impose up to a year’s jail on protesters who lock themselves to railings, gates or other objects. The measures would impose similar terms on activists who “wilfully” obstruct highways or the construction of major works like HS2.

Aiming to crack down also on Anti-vaxxers, the PCSC Bill would give Courts powers to impose “prevention orders” on protesters’ future behaviour, even if they’re not convicted of a crime. And police would get sweeping new powers to stop and search protesters, even without suspicion a crime was committed.

Home Office minister Baroness Williams withdrew the amendments from an early hours debate on Thursday 25 November in the face of peers’ fury, but warned she will re-table them in a new Lords debate in a few weeks. She told peers recent events showed

“The balance between the rights of protesters and the rights of others tips far too far in favour of the protesters. We cannot have sections of our transport infrastructure or other critical infrastructure brought to a halt by a small group of protesters, whatever their cause. We accept some level of disruption is to be accepted and tolerated from protest action, but there is a line to be drawn.

"Insulate Britain, Extinction Rebellion and others have overstepped that line.

"This suite of new measures is necessary to protect the public from the unacceptable levels of disruption we have seen as a result of the reckless and selfish tactics employed by some protest organisations in recent weeks.”

Labour peer Baroness Chakrabarti said it “tastes to me a lot like anti-terror legislation of the kind that I have always opposed as being disproportionate and counterproductive."

"This is nothing more than a naked attack against civil liberties and a crackdown on protest and we must oppose it for both what it is and how it's been done."[5]

In a private letter to members of the House of Lords, the government says it intends “to introduce a new offence of interfering with the operation of key infrastructure, such as the strategic road network, railways, sea ports, airports, oil refineries and printing presses, carrying a maximum penalty of 12 months’ imprisonment, an unlimited fine, or both”.

In the previous batch of post-debate amendments, the Bill sought, among other measures, to criminalise any protest that might interfere with the construction of new infrastructure. This most recent amendment will apply to existing infrastructure, potentially banning all effective protests, pickets or any other kind of action in places “such as” roads, railways, ports, airports, oil refineries and printing presses. The named infrastructure is bad enough, greatly limiting the scope of protest, but what does “such as” mean? Well, if printing presses are considered key infrastructure – an offering to the Murdoch empire, whose presses were targeted by Extinction Rebellion – this might apply to any corporate or government premises, as well as any public spaces.

The PCSC Bill's second reading was on 15–16 March 2021, by 359 votes to 263. As of 30 April 2021, the Bill had passed to the committee stage for consideration by the Public Bill Committee. The Committee was due to report back to Parliament by 24 June 2021. The Big Issue subsequently claimed that this date was delayed, partly due to pressure from protests.

Hundreds of #KillTheBill protesters rallied in Parliament Square in London on Saturday 15 January 2022, while demonstrations also took place in cities including Bristol, Cardiff, Coventry, Newcastle, Liverpool, Manchester, Newcastle, Sheffield and Plymouth. The PCSC Bill, sections of which have been condemned by human rights activists as an attack on the right to protest, will be voted on in the House of Lords on Monday 17 January 2022.[9]

Defeated by the Lords 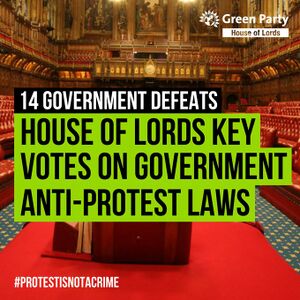 On 17 January 2022, the government was defeated in the House of Lords on some of the PCSC Bill's most contentious parts, including plans to give the police new powers to stop protests in England and Wales if they are deemed to be too noisy and disruptive.

The Lords also added some proposals of their own to the Bill, including one to make misogyny a hate crime. But some of the measures that the Lords rejected cannot now feature in the final legislation, because of the way the government introduced them.

These include one of most high-profile proposals, which would have made it illegal for protesters like Insulate Britain to cause serious disruption by locking themselves to things. This measure could now only be brought back by the government in a new Bill.[10]

After months of campaigning, the House of Lords defeated the government 14 times last night.

The worst of the #PolicingBill is behind us- but the bill still poses threats to civil liberties.

Thank you @GreenJennyJones and @natalieben for your work on this - over to the Commons![11]

Here's a video of each of last night's votes that the Govt lost on the #PolicingBill. (Clever work by @marcus_cain11!!)[12]

This page imported content from Wikipedia on 29 November 2021.
Wikipedia is not affiliated with Wikispooks.   Original page source here
Retrieved from "https://wikispooks.com/w/index.php?title=PCSC_Bill&oldid=235202"
Categories: