The "free market" is an aggressively promoted economic system run by a small, financially rich elite. However, as The Economist headlined a story from 2018, "Insider trading has been rife on Wall Street, academics conclude". The article observed that three recently published scientific papers seem to confirm what many have claimed for years: the "efficient markets" are not only inefficient - from an informational standpoint - they are also badly rigged.[1]

The US and other allied "developed" countries have "free markets" which make everyone better off by rewarding innovation, promoting competition and enterprise.

"In reality, the economy is so centrally planned that if the Fed alters one sentence in their statement, the Dow Jones could rally or fall by 200 points in an hour. Here’s another fact. Nearly 50% of America’s EBT program in Oklahoma went straight to the coffers of one company: Walmart."[2]

“I don't think a free market has existed in the United States since I was born in 1935. The market is rigged by enormous subsidies that go to favoured businesses. It's rigged in a half dozen other ways but that way alone would tip the scales. We have so many businesses that actually are bankrupt. They can't compete but they seem to be able to compete because your tax money and mine get poured into them in quiet, unnoticable ways.”
John Taylor Gatto [3]

"It has taken me more than 30 years as a journalist to ask myself this question, but this week I find that I must: is the Left right after all? You see, one of the great arguments of the Left is that what the Right calls “the free market” is actually a set-up. The rich run a global system that allows them to accumulate capital and pay the lowest possible price for labour. The freedom that results applies only to them. The many simply have to work harder, in conditions that grow ever more insecure, to enrich the few. Democratic politics, which purports to enrich the many, is actually in the pocket of those bankers, media barons and other moguls who run and own everything."

Charles Moore, former editor of The Spectator, The Sunday Telegraph and The Daily Telegraph.[4]

David Graeber remarks in The Utopia of Rules that "unlike the British Empire, which had taken its free market rhetoric seriously, eliminating its own protective tariffs with the famous Anti–Corn Law Bill of 1846, neither the German or American regimes had ever been especially interested in free trade. "[5] 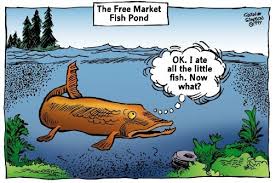 +
Has image2
File:Free market.jpg +
Has noRatings
0 +
Has objectClass
Concept +
Has objectClass2
Concept +
Has revisionSize
3,555 +
Has revisionUser
Robin +
Has sourcewatch
http://www.sourcewatch.org/index.php/Free market +
Has wikipediaPage
https://en.wikipedia.org/wiki/Free market +
Has wikipediaPage2
https://en.wikipedia.org/wiki/Free_market +
Is not stub
true +
ON constitutes
Freedom +
So called
true +
Has subobject"Has subobject" is a predefined property representing a container construct and is provided by Semantic MediaWiki.
"Free market" +