Gamaleya Research Institute of Epidemiology and Microbiology (GRIEM) is a Russian research vaccine institute responsible for the Sputnik V COVID-vaccine, which is being injected into several hundred million people in Russia and around the world.

“It usually takes about five years to develop and introduce a vaccine into clinical practice. Russian scientists have completed it in 2.5 months. They themselves created a vaccine and tested it on themselves,” Russian TV announced on May 19, 2020.[2]

"The vaccine created using this technology protected both humans and experimental animals with 100% effectiveness. Recently, a year and a half ago, we created a vaccine against the MERS virus, this is the Middle East respiratory syndrome, the closest relative of COVID-19,” Gamaleya director Alexander Gintsburg explained.[2]

What he left out, was that from 2009 to 2021, Gamaleya's four previous attempts at creating vaccines either failed or are still in trials.[3]

It was founded in 1891 as a private chemical microscopic and bacterial laboratory. The Institute was nationalised in 1919. It headquartered in Moscow and is currently under the purview of the Ministry of Health of the Russian Federation. The Gamaleya Research Institute was founded in 1891 and was named after the prominent Russian scientist Nikolay Gamaleya who was known as a pioneer in microbiology and vaccine research in Russia. The GRIEM is currently developing a vaccine in collaboration with the 48th Central Research Institute of the Ministry of Defence and with the Vektor Institute to curb the COVID-19 pandemic.

About 2,000 people in Guinea received injections of Ebola vaccine in 2017-18 as part of a Phase 3 clinical trial. GRIEM’s Ebola vaccines only have emergency use authorization in Russia[4]. Gamaleya also decided against applying for the WHO’s emergency use assessment and listing procedure (EUAL) for candidate medicines[5]

As of December 2020, Gamaleya’s MERS vaccines are still undergoing trials[6], and have not been approved anywhere in the world—including Russia[7]. 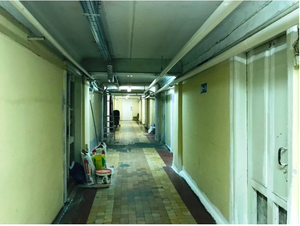 In July 2021 the newspaper Novyye Izvestiya had a look around one of the buildings on Gamaleya’s campus: "This temple of science looks more like an abandoned one, at best - resettled for demolition.But, to our surprise, we found employees coming in and out of the front door...It is impossible to believe that it was here that a saving development for humanity was born...as if everyone had forgotten about the building since the Second World War - it clearly needs urgent emergency measures.... The security guard said that this is the so-called "vaccine building", where scientists are busy working on their developments, and the bosses have a separate building nearby."[8][9]

Early in 2020 the Gamaleya Research Institute began research and development into a potential COVID-19/Vaccine. In May 2020, the GRIEM announced that it had developed the vaccine, which does not have any side effects.[10] Sputnik V represents Gamaleya’s fifth attempt at creating a vaccine — its four previous attempts either failed or are still in trials.

Russian President Vladimir Putin reportedly endorsed the use of the Gam-COVID-Vac Lyo vaccine, which is dubbed "Sputnik V” saying it had “passed all necessary steps” and noting that one of his adult daughters had received it. (Putin has not clearly acknowledged his children in public, but he does sometimes refer to them; one is a medical doctor in Moscow.) Putin, who apparently made these comments at a government meeting, added, “I hope we can start a massive release of this vaccine soon.”

On 12 August 2020, Moon of Alabama reported that Western media had indulged in an anti-Russian frenzy to sow fear and doubt about the vaccine based on a willful misinterpretation of the Russian announcement: "Russia has not approved a vaccine against Covid-19 and it is not skipping large-scale clinical trials."[11]

In 1989, the company Nearmedic was founded "on the basis of" the Gamaleya Insitute [12]. Their one and only independently developed drug, "Kagocel" (Кагоцел), is heavily marketed in Russia as antiviral medicine against flu and colds, and is included by the government on the list of "essential drugs" with allocated money in state agencies' budgets to buy this nonprescription medicine. An interesting fact about this drug is that it contains a chemical called Gossypol[13] that was used among other things as a contraceptive for men, due to its interference with sperm production. Advertising campaigns for Kagocel in Russia suggests taking the drug all year long as prophylactic against viral infections, but thus also working as a contraceptive reducing sperm count and activity level all year long. Anatoly Chubais became a member of the board of directors of Nearmedic Plus in 2020.[14]

This page imported content from Wikipedia on 14 August 2020.
Wikipedia is not affiliated with Wikispooks.   Original page source here
Retrieved from "https://wikispooks.com/w/index.php?title=Gamaleya_Research_Institute_of_Epidemiology_and_Microbiology&oldid=233680"
Category: