Erwin Meister is a Swiss businessman who, with his partner Edwin Bollier, formed the company Mebo Telecommunications in 1969. He lives near Zurich in Switzerland.

Erwin Meister and Edwin Bollier bought a Dutch freighter, the Silvretta, for £25,000 and spent a further £65,000 converting the ship to an offshore radio station. They renamed it Mebo II.[1]

Mebo II operated off the coasts of the Netherlands and England from 1970 to 1974, when it broadcast as Radio North Sea International (RNI).[2] After both countries enacted legislation outlawing the supply of offshore radio stations, Meister and Bollier leased the RNI vessel to Libya in 1977.[3]

In April 1978 Mebo II was renamed El Fatah, and was now owned by the Libyan Government. In 1984 both the Almasira (ex Angela) and the El Fatah (ex Mebo II) were used for target practice by the Libyan Navy. Both ships sank in the Gulf of Sidra, Mediterranean Sea.[4]

Because a MEBO timing device was alleged to have been used to trigger the bomb that destroyed Pan Am Flight 103 over Lockerbie, Scotland on 21 December 1988 killing 270 people, Erwin Meister was summoned to give evidence in week 8 of the Lockerbie bombing trial.[5]

Crown witness number 549, Erwin Meister (the ‘ME’ in MEBO) a partner in the Zürich-based firm, gave evidence on 16 June 2000 in the Camp Zeist courtroom. Meister, 62, told the court of MEBO's links with Libya. In Court, Meister said he recognised the defendant al-Megrahi from business meetings in Zürich and Libya prior to the Lockerbie bombing. Meister told the court that MEBO first had business dealings with the Libyan army about 1980 and that these meetings took place in Tripoli and Benghazi. Meister said that sometimes his contacts wore army uniforms and at other times civilian clothes. He named his contacts as Ezzadin Hinshiri and Said Rashid, both named in the indictment as being officers of the Libyan Intelligence Services. During 1985 MEBO, according to Meister, was doing regular business with Libya supplying them radio and communications equipment and had sold them a batch of 20 of their own MST-13 timers.

Meister went on to say that on several occasions in Tripoli and once in Zürich he met a man called Abdelbaset and he pointed him out in court. Meister said he got the impression that Abdelbaset was "on the same level or even higher than" Ezzadin in the Libyan Army structure. Meister told the court that MEBO received an urgent order from Libya for timers from the Libyan army a few weeks before the Pan Am bombing, but he explained that when the order came through, MEBO did not have the correct materials to produce its own-brand timers in time. Instead, they purchased Olympus timers which were to be delivered to Libya by Edwin Bollier, Meister's partner in MEBO. According to Meister, Bollier returned from Libya with the timers as they were said to be unsuitable.

Meister said he had heard about the Pan Am disaster from TV reports and that he and Bollier had discussed the tragedy. During the first fortnight of January 1989, Meister said that Bollier looked at the batch of Olympus timers that had lain on a shelf in the MEBO office since he had returned from Libya on the 20th December 1988. Meister said: "Mr Bollier called me and said look what I've discovered. In his hand he had a one of the Olympus timers and he asked me to look at it. It was programmed for 7:30pm and the day of the week was Wednesday." The Lockerbie bombing took place just after 7:00pm GMT on Wednesday 21st December 1988. Meister told the court that the Scottish Police first visited the MEBO offices in 1990 to request an interview and ask about the production of MST-13 timers[6] 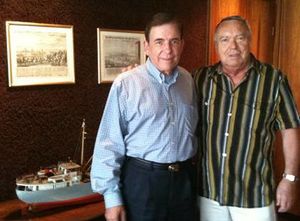