Document:Was the MST-13 timer fragment planted in the wreckage of Pan Am 103 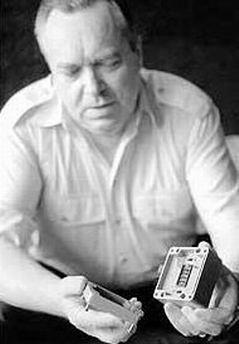 Edwin Bollier and his MST-13 Timer

Imagine, just for a moment, that you are a terrorist. Your one aim in life is to cause a transatlantic flight from London to New York to fall out of the sky. You're not a suicide bomber though, so getting on the plane yourself is out. How would you set about it?

By the way, it's winter. Just before Christmas.

Suppose you have a neato electronic timer, that can be set for any time you like from 1 minute to 999 hours. And you have a bomb disguised as a radio-cassette player, and a suitcase of clothes to put it in.

Do you decide to introduce the unaccompanied bomb into the system in Malta, on an Air Malta flight to Frankfurt, there to negotiate the baggage system to get itself on to a Pan Am flight to Heathrow, where it will be unloaded again and transferred to the actual transatlantic flight?

And then do you set the timer to so short a time that if anything delays the timetable for only an hour, the bomb will almost certainly go off on the ground somewhere?

Terrorists are not stupid, why would anyone decide on a plan like this?

And the one thing you might do to hedge against delays, which is to set the timer so that the explosion happens perhaps half an hour before the flight is scheduled to reach Newfoundland, so that even if it's two or three hours late it'll already be over the ocean - you choose not to do. You set the timer for only one hour into the on-time flight.

And yet that's what we're led to believe was the cunning plan that brought down Pan Am 103 over Lockerbie in 1988.

In fact nothing much went wrong with the plan, if that's what it was. The flight was delayed, but only by 25 minutes. The crash happened over southern Scotland, rather than the Outer Hebrides or maybe Ireland. But does it make any sense to devise a plan with so many opportunities for it to fall flat on its face?

Note that this argument is the same irrespective of the identity of the terrorists. Palestinians, Libyans, Al Qaeda, IRA, doesn't matter. Why would you choose to send your carefully-placed bomb on such a chancy journey?

Of course, there have been allegations that the bomb could have got on board in Frankfurt, or at Heathrow. This makes better sense, especially the latter. Only one flight to worry about catching. Only one set of security surveillance systems to negotiate. Much less chance of the luggage doing what luggage does only too often - go astray.

So maybe that's what happened. Maybe it really was smuggled on at Heathrow. So, does the problem go away?

You still have that cool elecronic timer. You can set it for any time you like up to nearly six weeks in advance. It's still December in northern Europe. And by the way, it's the rush hour. Planes are not exactly guaranteed to take off on time, even if the luggage has been loaded on schedule.

So you set it to go off only an hour after the scheduled take-off time. In a flight that should last nearly eight hours.

That's why the presence of the MST-13 Timer in association with the Lockerbie bombing makes no sense at all. It doesn't matter whether you're talking about some daft scheme to get the thing through the continental airport baggage system on three different flights, or a direct up-load at Heathrow. It makes no sense to set such a versatile timer to such a short fuse, under these circumstances, no matter who you are or where the bomb began its journey.

Consider in contrast the original assumption for why the crash happened so early.

In October of 1988 a Palestinian terrorist cell was busted in Frankfurt. Four improvised explosive devices were seized, all constructed from Toshiba radio-cassette players, and apparently intended for attacks on airliners. For reasons that might be interesting later on if this turns into a LIHOP (“Let It Happen On Purpose”), the ringleaders (including the bomb-maker) were released after only a few days. It was known or suspected that a fifth bomb existed that had not been seized.

The seized devices didn't have your spiffy electronic timers. They had things called "ice-cube" timers, much less sophisticated in that they had a pre-set time in them that the operator couldn't vary. They were however sophisticated in a different way. They incorporated aneroid barometers, so that they would be safe indefinitely at sea level but would start to tick if the atmospheric pressure fell below 950mB. These things were deadly if smuggled on to airliners, and it didn't matter when the plane actually took off, the explosion would happen at the pre-determined time into the flight. The devices seized at Frankfurt were set to explode between 35 and 45 minutes after takeoff.

Maid of the Seas blew up 38 minutes after taking off from Heathrow.

The suitcase and the clothes and the radio-casette bomb and its triggering device were scattered all over Dumfriesshire and points east. It was something of a miracle that fragments of anything so close to the explosion were recovered, but they were. Enough to identify the make and style of the suitcase, and the model of radio-cassette player, and trace the origin of the clothes. It was even determined where exactly in the hold the suitcase had been when it exploded.

Then, at some time in 1989, or possibly 1990, a small fragment of a MST-13 Timer was allegedly identified in the debris collected.

The confusions surrounding that tiny fragment of debris are legion. The label of the original collection bag was altered, by an unknown party. The notes relating to its examination in England appear to have been falsified, appearing on an extra page interpolated into a loose-leaf folder, with subsequent pages re-numbered to compensate. Oh yes, and the "scientist" doing the examination was the same guy as was responsible for the false conviction of the Maguire Seven.

Then things get even murkier. Was the circuit board green or was it brown? Was it hand-made or machine-made? Was there solder on the terminals showing it had been connected to a bomb, or not? Was the fragment shown to the manufacturer at the trial the same item as the fragment allegedly found embedded in a shirt collar at the crash site? Was the manufacturer playing silly buggers in the witness box (and if so, why?), or was he genuinely confused by mysterious changes that had taken place in the fragment? Is it even possible for an object of that nature to have survived at all, so close to that amount of Semtex going up?

Why did the shopkeeper swear two affidavits saying that he hadn't sold a shirt to the purchaser of the other clothes, and then suddenly change his mind and declare that he had sold him a shirt of the right make in a later statement?

This seems to be the nub of the CT surrounding Lockerbie, once you've got past the point of realising that Megrahi was quite obviously framed by the prosecution, who were being fed information from the US investigators into the case. Re-examining the evidence brings you smack against the MST-13 Timer every time. Nobody who had such a timer would have taken the risk of setting it to explode only an hour into an eight-hour flight.

And yet a fragment of such a timer was allegedly found in the wreckage. This then became the "breakthrough find", that diverted the investigation away from the Palestinian/Syrian/Iranian line of enquiry, and switched to implicate Libya.

Is the suggestion that the timer fragment was planted in order to obfuscate the investigation and eventually lead on to the indictment of Libya for the crime entirely fanciful?

Why not leave the thermite and the holographic planes for a bit and look at this one?

Paul Foot's 2001 Private Eye investigation is a good place to start - "Flight from Justice". It's behind a £5 paywall, but worth the money.

There are a number of documentary films covering the issues, all taking rather different lines. And none of them are made by Dylan Avery.

And for a lot more information and links, the best source is probably the site of the official UN observer at the trial of the "Lockerbie Bomber" in 2000-2001, Dr Hans Köchler.

The senior academic lawyer who was responsible for getting the trial at Camp Zeist organised has a blog on the subject with a collection of relevant articles, Professor Robert Black.

Megrahi was framed. That seems indisputable. However, was this simply over-enthusiastic investigators cavalierly pinning the crime on someone who happened to be handy due to pressure to "get a conviction"? Or is it more sinister than that?