In 1968 Erwin Meister and Edwin Bollier were among a group intending to broadcast as Radio Gloria from the former Radio London ship, Galaxy. On 2 July 1968, the German government banned off-shore broadcasting. The Gloria project collapsed.[2] Meister and Bollier bought their own vessel, the Bjarkoy, and set up a radio station. They renamed their ship Mebo, then Mebo I, and, after transmissions ended, Angela.[3] Before fitting was completed, the Mebo was found to be too small for broadcasting but too big as a tender. However, she was used while the Mebo II was operating off England.

Originally Silvretta, and built in Slikkerveer, Netherlands in 1948, the 630-tonne vessel was 8.85 metres wide, 3.25 metres deep and 53 metres long. In 1969 Mebo Telecommunications bought Silvretta, fitted her as a floating radio station, and renamed her Mebo II. Since Mebo was too big to tender Mebo II off the Netherlands, RNI used a smaller vessel, Trip Tender, which Radio London had also used (when she was called Offshore 1.) The psychedelically-painted Mebo II carried a Medium Wave transmitter at 105 kilowatts (more than twice the 50 kW TXs used by Radio London and Radio Caroline), though it operated at 60 kW or less.

One of five RCA-built prototype transmitters, and the only one still in service, it rarely if ever broadcast at full power. It had the highest power of any ship-based pirate station, and the second-highest of any ship-based broadcast station. The Voice of America's MV Courier in the 1950s had the highest, with 150 kW on Medium Wave.</ref> Mebo II also had SW and FM transmitters, able simultaneously to broadcast four different streams on four different channels.[4]

On 23 January 1970, Mebo II began test broadcasts from the Dutch coast, in English and German. When regular broadcasting began on 11 February 1970 it was more popular in the United Kingdom than the Netherlands or Germany. On 23 March 1970 Mebo II sailed to the East coast of England, arriving at 09:00 on 24 March 1970 and anchoring in international waters, five miles from Clacton in Essex.

The Labour government in Britain began jamming Mebo II's MW signal at 2030 hours on 15 April 1970. RNI responded with pro-Conservative Party political messages for the 1970 United Kingdom General Election on 18 June 1970. On 13 May 1970, RNI responded to complaints about interference by changing its MW channel to 1230 kHz (244 metres). This improved reception but was adjacent to the pop music service of BBC Radio One on 1214 kHz (247 metres). Jamming followed five days later, causing interference to BBC Radio as well as RNI, especially in Kent, south-east England].

On 13 June 1970, five days before election day, Radio North Sea International changed to Radio Caroline International and launched a campaign in support of the Conservative party. The name change and political campaign were supported by Radio Caroline's founder Ronan O'Rahilly. Listeners were told that their freedom to listen to the radio station of their choice was under threat and that, if the Labour party were returned to power, the station would close: their vote should therefore be Conservative, the only party that supported commercial radio. Ronan O'Rahilly headed the campaign on land, using a double-decker bus and posters depicting Harold Wilson as China's Chairman Mao.

They believed the Conservatives would end jamming. Conservative policy was to establish local land-based commercial radio in the UK. At a Fight for Free Radio rally the weekend before the election, Conservative loudspeaker-vans urged 'Vote Conservative and fight for free radio'. The Conservatives won and there is evidence that the Radio Caroline and RNI campaigns made a difference to the result.

Two days after the election, the station reverted to RNI. Because jamming continued, Mebo II returned to the Dutch coast on 23 July 1970.

This is a transmission from the Norwegian coast station Rogaland Radio operating in single side band mode, upper side band, with a carrier frequency of 6215.0 kHz. The purpose of this transmission is to clear the channel of unauthorised and out of band broadcasting, to improve reception conditions for ships wishing to communicate with coast stations on this frequency or on adjacent maritime channels.

Harris also claimed Edwin Bollier vowed to take revenge on the British government because he felt RNI had been singled out for jamming. Harris's theories are controversial and there has never been evidence to support them.

From June 1971 until the end of August 1974 Radio North Sea International was a regular and reliable broadcaster from international waters, four miles from the coast of the Netherlands. The main MW transmissions continued at about 50 kW on 1367 kHz, shortwave using 10 kW on 6205 kHz and VHF FM on 100 MHz. Dutch programs, which were mostly taped on land, were extended eventually to 20:00 Central European Time (CET). Programs in English extended at the weekends from 03:00 until 06:00, when Dutch language programming began. The second 10 kW AM TX was tested on medium wave 773 kHz, and on 30 September 1972 as RNI 2, a second stream on 1562 kHz, in addition to the main stream on 1367 kHz, and intended to assure advertisers that, if need arose, Mebo II could continue transmissions on another frequency. The main English language service closed at midnight on 30/31 August 1974, and Dutch transmissions ceased on 31 August 1974 at 20:00.

While the two vessels were laid up in the Netherlands, both were fully refitted. Early in 1977, Mebo I, now renamed Angela and Mebo II were sold to Libya. They sailed, each with a crew of nine, for Libya, arriving Tripoli on 9 February 1977. Mebo II was renamed El Fatah, and Angela was renamed Almasira. El Fatah then broadcast as Radio Jamharia with programmes such as the Arab Voice, Libya International in English and the Holy Quran. This continued until 1980, when Heinz Hurter, Edwin Bollier's second wife's brother was the only Swiss national to remain aboard.

One of RNI's former DJs, Robin Banks, accompanied the vessels to Libya, and stayed with them as a transmitter engineer until 1980. The Almasira and the El Fatah were said to have been used as target practice by the Libyan Navy in the 1980s, and were sunk in the Gulf of Sidra, Mediterranean Sea.[6] 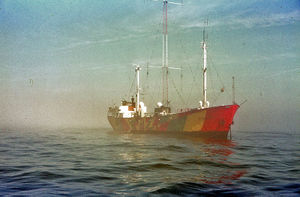