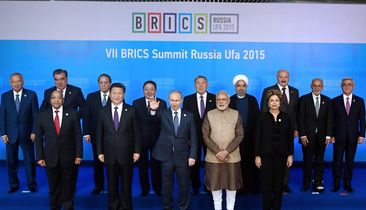 Image right: Photo-call of leaders at the pening of the 2015 BRICS/SCO summit in Ufa, Russia

This article was originally published by the Strategic Culture Foundation on 10 July 2015.

The prelude to epoch-defining geopolitical changes. At the crossroads of Asia and Europe, it has been decided that the Russian city of Ufa will be the point of convergence for all the initiatives and projects of the Silk World Order of trade and integration that China and Russia are spearheading. Ufa, which is the capital of Russia’s Bashkortostan, is being used to simultaneously host an extraordinary summit for both the BRICS—which has increasing become an alternative forum to that of the G7—and the Shanghai Cooperation Organization (SCO) respectively from July 8 to 9 and from July 9 to 10, 2015.

The Coming Together of Eurasia and Beyond

The joint BRICS and SCO summit in Ufa has been organized by Moscow as the simultaneous holder of both the rotating chairmanships of the BRICS and the SCO. It is no coincidence, however, that the Seventh BRICS and Fifteenth SCO summits have been amalgamated as one large international summit. The Kremlin has used the opportunity to bring Russia’s partners together. This is part of the integration process of the Silk World Order. There will be joint BRICS and SCO sessions and many important exchanges and discussions about a new archetype for the world.

One informal session at Ufa will not only include all the members of the BRICS and the SCO, but will also include all the members of the Eurasian Economic Union (EEU), according to information disclosed by Russian President Putin’s aide Yury Ushakov to the Russia media days before the summit in Ufa. Aside from Brazil and South Africa, since all the members of the BRICS and the SCO are located in Eurasia, the Kremlin saw it as pertinent that the EEU be involved in some type of discussion about the development of the Eurasian space. In essence this means that Armenia will be attending the joint BRICS and SCO summit in Bashkortostan, since all the other members of the Eurasian Economic Space are either full SCO members or, in the case of Belarus, an SCO dialogue partner. According to the Mercator Institute for China Studies (MERICS) in Berlin, which asserts that the BRICS-SCO-EEU talks are «a sign that Russia is aiming for political block-building,» the Republic of Azerbaijan and Turkmenistan will also take part in informal meeting of the BRICS, SCO, and EEU. [1] The Eurasian and global convergences in Ufa are clear. Using the links that already exist between the two, China’s New Silk Road and the Russian-led Eurasian Economic Union will begin a roadmap to fuse together in Bashkortostan as the pivotal axis of rotation in the Eurasian space. This is a continuation of the high-level discussions that were announced by both Chinese President Xi Jinping and Putin on May 8 on the Xi Jinping’s arrival to Moscow, ahead of the Victory Day celebrations on May 9, 2015.

After failed attempts at different venues, Indian Prime Minister Narendra Modi and Iranian President Hassan Rohani will finally meet in Ufa. India and Iran are rekindling their strategic bonds that had been neglected by the government of Modi’s predecessor, Prime Minister Manmohan Singh. The use of the Iranian port Chabahar by India for gaining access to Russia and Central Asia through the North-South Corridor will definitely be discussed by Indian and Iranian officials at Ufa. 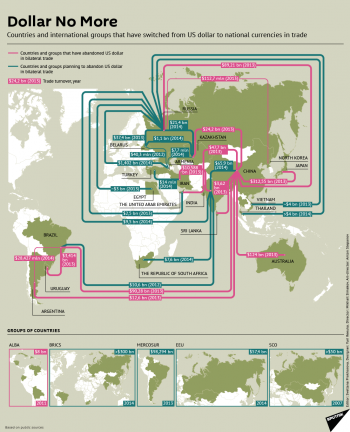 The Coming Silk World Order Being Unveiled in Ufa

While the New Silk Road and the EEC come together in Ufa, the BRICS will put together a development map while the SCO will outline its expansion plans for new full members. The applications of India, Iran, and Pakistan for full membership will be addressed. Moreover, Egypt and several other countries have applied to join the SCO in come context.

Ufa is being used to stamp out a roadmap for the «Eurasian Century» and a Silk World Order that goes beyond Eurasia, which includes everything from a transcontinental mega railroad network connecting the Iberian Peninsula to the South China Sea and to what has been dubbed as the «modern city of the Eurasian continent» in Belarus.

The US is clearly worried about the Silk World Order that is emerging. It has begun to pull out all the stops, from courting Brazil on the eve of the summit in Ufa to calls for the European Union to not join China’s banking project. The Pentagon’s 2015 Military Strategy that addresses the possibility of confrontation with an updated "Axis of Evil" composed of China, Russia, Iran, and North Korea is catered to Washington’s proclivity to confront the countries that are challenging a US-dominated international order.

While Washington and NATO are making a general call to arms, the Chinese are busy building trade infrastructure and transport networks. In Belarus, the Chinese are building the first «modern city of the Eurasian continent» in the forests next to the Minsk National Airport as part of what Bloomberg calls "a manufacturing springboard between the European Union and Russia." [2] Upon completion, the new export-oriented city in Belarus, which is being built on the route of the European highway that links Berlin, Warsaw, Minsk, and Moscow, will be the largest manufacturing and industrial park in Europe.

The US Dollar and Bretton Woods are Finished

The Silk World Order that is being shaped in Ufa will see the existing Bretton Woods financial architecture of the world unraveled and replaced by one that is no longer dominated by the trilateral grouping of the United States, Western Europe, and Japan. The monopoly of the World Bank and the International Monetary Fund, which has benefited Washington, is at its end. The US dollar as a currency in bilateral and multilateral trade is being scraped by the BRICS, SCO, and EEU— Washington’s flooding of oil markets was partially aimed at derailing this by forcing renewed dependence on the US dollar for energy trade. The BRICS New Development Bank (NDB), the first institution of the BRICS, is being launched by [[Brazil, China, India, Russia, and South Africa. It is joined by the SCO Development Bank and by the recently launched Asian Infrastructure Investment Bank (AIIB) in the assault on Bretton Woods.

Gone are the days of unchallenged US domination. The architecture of the post-Second World War or post-1945 global order is now in its death bed and finished. With or without Washington, a Silk World is emerging and its coming is being trumpeted from Ufa as the SCO strengthens and the BRICS institutionalizes itself as the cornerstone of a new multi-polar world order.