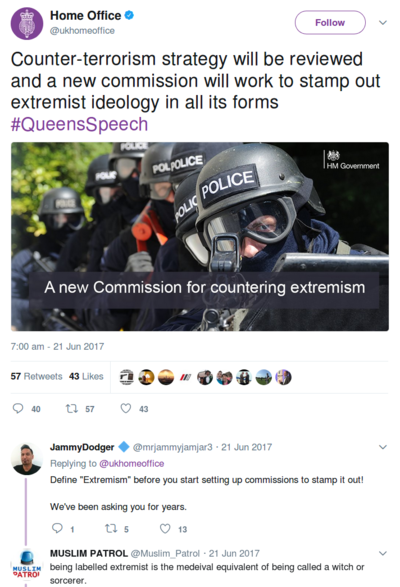 The Home Office tweet announcing that they would set up a new commission to "counter extremism". Reaction was generally negative, and centred on the failure to explain what was meant by "extremism".[1]

The Commission for Countering Extremism is a "counter extremism" group set up by the UK Home Office after the 2017 Manchester bombing. Questioning the image used by the Home Office for announcing its creation, The Guardian stated that it evoked an "Orwellian vision of [the] anti-extremism commission".[2]

The UK Home Office website announced in January 2018 that: “the Commission will play a key role in the ongoing fight to counter extremism in the UK. It will:

"The Home Secretary and the Lead Commissioner [Sara Khan] have agreed the following priorities:"

“Engaging widely and openly on extremism and Britain’s values across the public sector, communities, civil society, and with legal and academic experts. We need to make the case for tackling extremism and the harms it causes, beyond terrorism, in our communities.

Producing a strategic assessment of the threat we face from extremism, and the current response. This will consider the prevalence, concentration and range of extremism that exists in this country, identify the drivers of extremism, and review the success of current approaches in tackling it.

Advising Ministers on the Commission’s future structures, work programme and the appointment of further commissioners. This advice will in part be informed by the Lead Commissioner’s engagement with stakeholders.”
(25 January 2018)  [3]

Without citing evidence, the website claimed twice in successive sections that "Extremism causes a wide range of harms, including the promotion of hatred and division, discrimination against women and girls, the encouragement of isolation, and the rejection of our democratic system and the rule of law."

In January 2018 Sara Khan was appointed Commissioner for Countering Extremism, a widely criticised choice.[4][5][6][7][8] She stated that she would "create a Commission that is forthright in challenging extremism in the name of our shared values, fundamental freedoms and human rights."[9]