Christopher Wylie (born 19 June 1989) is a Canadian data consultant and whistleblower who previously worked at Cambridge Analytica, a political consulting firm led by Alexander Nix. On 27 March 2018, Wylie presented claims to a House of Commons select committee that Palantir, a secretive company co-founded by billionaire Peter Thiel, had worked with Cambridge Analytica:

“That was not an official contract between Palantir and Cambridge Analytica, but there were Palantir staff that would come into the office and work on that data, and helped build the models we were working on.”[1]

He also dramatically claimed an extensive Russian influence operation to change the outcome in the Brexit referendum and to elect Donald Trump in 2016, which tied in to the Russiagate psychological operation. These claims were debunked by the British government's own investigation a few years later.

Early in 2018, Christopher Wylie released a cache of documents prompting the Facebook–Cambridge Analytica data scandal,[2] giving The Guardian documents that described the secret workings behind Cambridge Analytica.[3] The documents were centered around Cambridge Analytica's alleged unauthorised possession of personal private data from up to 87 million Facebook user accounts,[4] which was obtained for the purpose of creating targeted digital advertising campaigns. The campaigns were based on psychological and personality profiles mined from the Facebook data which Wylie had commissioned in a mass-data scraping exercise. Wylie's revelations soon triggered government investigations on both sides of the Atlantic and raised wider privacy concerns.[5][6]

When Wylie testified behind closed doors to members of the Democratic-controlled US House Judiciary Committee and an Oversight and Government Reform panel in April 2018, he stunned the lawmakers with claims that Cambridge Analytica had tested messaging with American voters about Russian President Vladimir Putin and his policies in Eastern Europe. Wylie claimed that people who worked on the US and UK campaigns had connections to two Russian intelligence outfits, as well as to Russians and Russian companies which were in turn linked to the Kremlin itself.[7]

The dramatic story was systematically cultivated by Carole Cadwalladr, a journalist with hidden connections to the UK government's Integrity Initiative, who won great establishment acclaim for her reporting.

The boosters of Wylie stated that a US investigation led by Robert Mueller and a UK investigation by the Information Commissioner’s Office would soon provide the data trail and "the chain of evidence that is required to understand how the Russian government’s influence operation targeted American voters.”

But by 2020, it was clear the data trail promised by Cadwalladr never arrived. Instead, after an extensive investigation, the British ICO produced a report[8] that contradicted virtually ever major prediction and assertion that Wylie and Cadwalladr made about SCL-Cambridge Analytica and its role in UK politics.

Wylie appeared in the 2019 documentary The Great Hack. 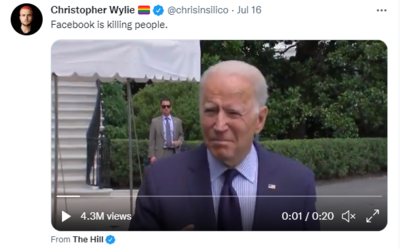