Cassandra Fairbanks (born March 11, 1985) is an American journalist and activist. As a journalist, she has worked for the Russian state-funded international news agency Sputnik (2015–2017), and far-right American media websites Big League Politics (2017) and The Gateway Pundit (2017–present). As an activist, she is best known for "Find the Dancing Man," her successful 2015 social media campaign against fat shaming, and for helping to organise the "DeploraBall" in Washington DC to celebrate the 2017 inauguration of President Donald Trump.

In June 2021, Fairbanks became the first editor in chief of Timcast News.[1]

In 2018, Cassandra Fairbanks arranged the unexpected appearance of Chelsea Manning at what The Washington Post headlined as "a far-right pro-Trump bash".[2]

In 2020, Cassandra Fairbanks submitted evidence to the legal team defending WikiLeaks founder Julian Assange in his London extradition hearing, and posted audio online of a September 2019 phone call to her from Arthur Schwartz, a conservative consultant with close ties to Richard Grenell, US Ambassador to Germany. Schwartz told Fairbanks that Grenell "took orders from" President Trump when the ambassador secretly brokered Assange's April 2019 arrest at Ecuador's London embassy, where Assange had been given political asylum. 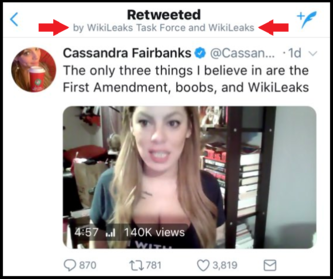 “I did not agree our conversation was off record, though Schwartz did tell me not to tell anyone about the call.

“Schwartz repeatedly insisted that I stop advocating for WikiLeaks and Assange, telling me that a ‘pardon isn’t going to fucking happen'. He knew very specific details about a future prosecution against Assange that were later made public and that only those very close to the situation then would have been aware of. He told me that it would be the ‘Manning’ case that he would be charged with and that it would not involve the Vault 7 publication or anything to do with the DNC.

"He also told me that they would be going after Chelsea Manning.”[3]

Fairbanks shared a fundraiser on Twitter for Millie Weaver.

A Document by Cassandra Fairbanks

This page imported content from Wikipedia on 22 September 2020.
Wikipedia is not affiliated with Wikispooks.   Original page source here
Retrieved from "https://wikispooks.com/w/index.php?title=Cassandra_Fairbanks&oldid=230088"
Categories: