The Brazzaville Foundation For Peace And Conservation (TBF) is a private UK company registered in 2014.[1] TBF's founder is Jean-Yves Ollivier, its patron is HRH Prince Michael of Kent and its three-man board of trustees are former Thatcher adviser Tim Bell, Jean-Yves Ollivier and Philip Prettejohn.[2] Institute for Statecraft advisor Nicholas Chance has been a director since 2017.[3]

The Brazzaville Foundation believes that only by achieving lasting peace and stability can nations thrive, people prosper and the environment be safeguarded. The Foundation’s work is conducted on a non-profit basis by distinguished individuals of the highest integrity and achievement. The Foundation draws its authority to act on appeals from States afflicted by internal conflict, those with conflicts on their borders, and through regional or multi-national institutions seeking mediation support. TBF’s work will be judged on the ensuing peace dividend, through the fostering of political and social stability, through the creation of jobs, prosperity and empowerment of affected citizens.[4] 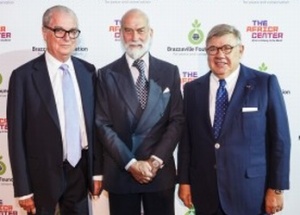 TBF was launched a quarter century after the Brazzaville Protocol, which ended the Cold War in Africa almost a year before the Berlin Wall crumbled and brought not only peace to Southern Africa but also opened the door for the release of Nelson Mandela, and for a negotiated end of apartheid and the advent of the ‘rainbow nation’. TBF keeps the ‘spirit of Brazzaville’ alive through the combination of bold statesmanship and ‘citizen diplomacy’.

TBF's Patron is HRH Prince Michael of Kent, seconded by a board of trustees composed of eminent personalities, business as well as political leaders and dignitaries from a wide range of civil society organisations. Its chairman, and one of its trustees, is Jean-Yves Ollivier, a French businessman who has been engaged in Africa for more than thirty years. His behind-the-scenes diplomacy was reportedly instrumental to the conclusion of the Brazzaville Protocol.[5]

The PR Firm Bell Pottinger, which has been caught in the midst of a high level lobbying investigation, has been linked to edits on the Wikipedia website which bolstered the credentials of their client, prostate cancer specialist Professor Roger Kirby, and linked his experience to Abdelbaset al-Megrahi. Bell Pottinger staff had been caught on camera this week boasting of enabling foreign office policy changes on behalf of clients due to their claimed access at the highest levels of Government and monarchy in the UK. Ten accounts linked to Bell Pottinger were subsequently closed by Wikipedia, following the personal intervention of the site’s founder, Jimmy Wales.

This is not the first time Wikipedia entries in relation to the Pan Am 103 case have been systematically edited. In 2007 Dr Ludwig De Braeckeleer published an extensive report documenting how the entries relating to the Lockerbie event had been methodically altered by US based intelligence services, whose involvement had extended to positioning a family liaison operative close to the families. Several entries in respect of the atrocity which had referenced news articles and investigations published by The Scotsman newspaper and The Firm now no longer appear on the site.[6]

The Brazzaville Protocol of 13 December 1988 was a momentous event in the history of modern Africa. This preliminary agreement came six months after the Reagan/Gorbachev summit in Moscow, and was the culmination of years of behind-the-scenes negotiations aimed at bringing about the end of apartheid and white-only rule in South Africa.

Initialling the protocol preceded the formal signing on 22 December 1988 by representatives of Angola, Cuba and apartheid South Africa of the New York Accords at UN headquarters, which would be the cornerstone in the creation of modern South Africa, finalising the process of political emancipation for millions of South Africans.[7]

Absentee at the signing

UN Commissioner for Namibia, Bernt Carlsson, was killed aboard Pan Am Flight 103 on his way to the US to sign the New York Accords,

The New York Accords, giving effect to the Brazzaville Protocol, were scheduled to be signed the following week at UN headquarters in New York on Thursday 22 December 1988.[8] United Nations Assistant Secretary-General and UN Commissioner for Namibia, Bernt Carlsson, who would have assumed control of the country until Namibia's first universal franchise elections had been held, was unable to attend the signing ceremony, being one of 259 passengers and crew killed when Pan Am Flight 103 exploded over Lockerbie on 21 December 1988.[9] Following the UN Commissioner's death at Lockerbie, South African foreign minister Pik Botha went ahead and signed the Tripartite Accord on 22 December 1988. However, instead of handing control of Namibia to the United Nations, Pik Botha put the apartheid regime's Administrator-General, Louis Pienaar, in charge. No investigation by the Scottish Police, the CIA, the FBI or the United Nations has ever been conducted into the evident targeting of Bernt Carlsson on Pan Am Flight 103, despite the branding of apartheid South Africa as a "terrorist state" by Governor Michael Dukakis, Democratic nominee in the 1988 US presidential election campaign.[10]