B'nai B'rith (from b'né brit, "Children of the Covenant")[1] is the oldest Jewish service organization in the world. B'nai B'rith states that it is committed to the security and continuity of the Jewish people and the State of Israel and combating antisemitism and bigotry. Its mission is to unite persons of the Jewish faith and to enhance Jewish identity through strengthening Jewish family life, to provide broad-based services for the benefit of senior citizens, and to facilitate advocacy and action on behalf of Jews throughout the world. 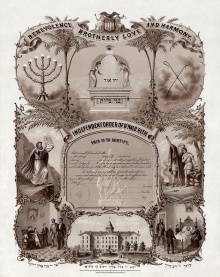 B'nai B'rith International is affiliated with the World Jewish Congress. B'nai B'rith charges people with anti-semitism. In 2016, the group campaigned for the dismissal of Anthony Hall.[2]

“Ernst Zundel does not deserve the privilege of Canadian citizenship. Not only would this be an affront to minority communities throughout Canada, but it would send a message to hatemongers the world over that Canada is a haven for racism.”
B'nai Brith (28 July 1994)  [3] (Montreal)
The statement was made by way of objection to Ernst Zundel's 2nd application for Canadian citizenship after having lived there peacefully for 38 years.

A Quote by B'nai B'rith