Freemasonry is the largest worldwide secret society.[1][2][3] In the United States, Freemasonry led to the creation of the first third party in 1828, the Anti-Masonic Party.[4]

The first UK lodge was founded on 24 June 1717. The historian Jessica Harland-Jacobs concluded that by 1930, Masonry had a strong overall presence in the Army of the British Empire,[5] while regimental/military lodges were already common by the mid 18th century,[6] from whom British masonry spread to all regions of the globe. 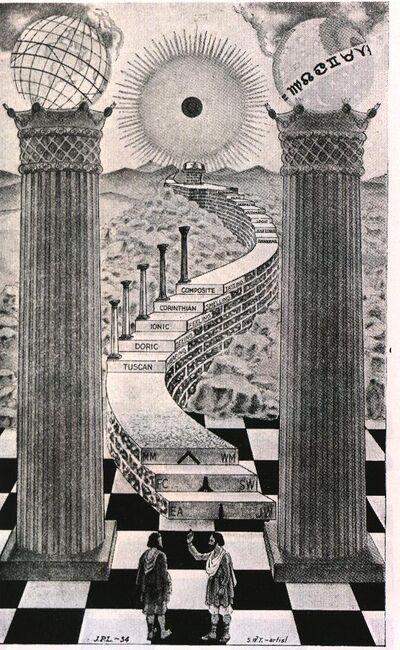 The ideals of Freemasonry hold that a Freemason shall:[7][8]

Albert Pike is considered one of the most important Masons of all time. In his book Morals and Dogma he writes:

“Lucifer, the Light-Bearer! Strange and mysterious name to give to the Spirit of Darkness! Lucifer, the Son of the Morning! Is it he who bears the light, and with its splendors intolerable blinds feeble, sensual or selfish Souls? Doubt it not!”
Albert Pike [9]

Criticism of Freemasonry is known to masons as anti-masonry.[10] The Catholic Church has a history of condemning Masonry and "affiliated" societies via so called papal bulls and encyclicals.[11] The best known being Humanum Genus, which states in 1884:[12]

"the sect of Freemasons grew with a rapidity beyond conception in the course of a century and a half, until it came to be able, by means of fraud or of audacity, to gain such entrance into every rank of the State as to seem to be almost its ruling power".

Some catholics, like Carlo Maria Viganò, have renewed the criticism more recently:

“Freemasonry is the mystical body of Satan. Because Satan is the entity that it adores, at it's highest levels of initiation. The illumination which it promotes to his members consists in subjecting them to the cultic worship of a great architect, which shows its infernal features only when one is no longer able to turn back.”
Carlo Maria Viganò (October 2021)  [13]

The Propaganda Due (P2) lodge was a significant vehicle to implement Operation Gladio in Italy.

The UK/Army,[14][15] as well as the US/Army do have masons in the service.[16] Exact numbers are not available, but according to some accounts the influence in the US Army is considerable.[17]