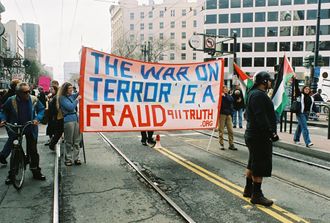 Some well informed sceptics were suspicious about the events of 9/11 from day one, or even before.[1] A pioneer in the 9-11 Truth movement was Michael Ruppert, who was publicly calling into question the US government's official narrative before the end of the year.[2] His initial research and findings centered on the unprecedented number of drills carried out that day.[3] Many US citizens were in profound shock, and anti-Muslim sentiment fueling was violent attacks on Muslims (following the example of the US government, which illegally detained and tortured some Muslims). The social pressure for conformity was tangible. 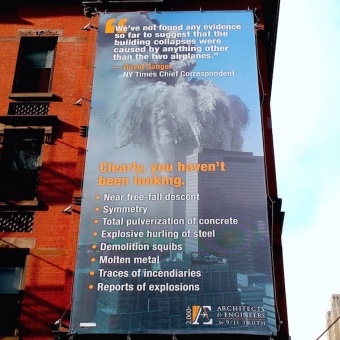 A 9/11 Truth movement billboard up in New York

The greatest contribution to exposing the lies of 9/11 has been made by a large number of individual activists, organising and communication through the Internet, where such peer pressure was less tangible and information and opinions could easily be shared. Gradually, larger sets of small details emerged which told a quite compelling alternative story to that alleged (and never proved) by the US executive. 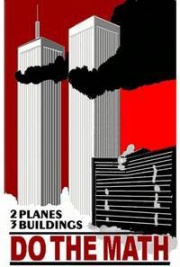 The truth movement built slowly but can be really have been said to got going around 2005/6[citation needed], when video was released which showed the collapse of WTC7. As a single, highly visual event which was both clearly significant but unreported upon, this became something of a turning point for the 9/11 Truth movement, providing a focal point for dissent and reflection even for those initially conditioned to accept the US government's account. Tellingly, the government had attempted to censor it from the official history - originally omitting all reference to the building in the original 9/11 Commission report. Since video of the collapse was not been broadcast after September 11th, viewers had no alternative explanation to cause cognitive dissonance, and this assisted their realisation that such a collapse could not have happened without explosives. In February 2007 a video of BBC foreknowledge was uncovered and provided hard evidence of an organised establishment deception.

Architect Richard Gage randomly heard the theologian David Ray Griffin speaking to Bonnie Faulkner about the collapse of the World Trade Center on her radio program, Guns And Butter. Quite stunned at what he heard, he decided to seriously look into the matter. This lead to the formation of the best known 9/11 truth group, Architects and Engineers for 9/11 Truth (AE911 Truth). It has over 2300 qualified architects and engineers as members. 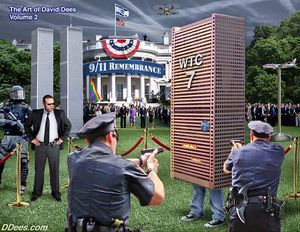 The preferred establishment response to the truth movement for a long time was silence - echoing their behaviour in response to Gary Webb's Dark Alliance, which meticulously document the CIA's drug trafficking. When this silence became so long as to become in itself suspicious and the movement's popularity continued to wax rather than wane, the commercially-controlled media such as the BBC have released various hit pieces, and a range of spookily connected people have aligned themselves with the movement.

Leaving aside the official investigations, the main proponent of "Debunking" the claims of the 9/11 truth movement has been carried out by Popular Mechanics. After interest in the spontaneous collapse of WTC7 began to escalate, the BBC produced a hit piece on this in their Conspiracy Files series.

When the Canadian government was confronted with survey results that 33% of their population were in favor of a Parliamentary review of the 9/11 Commission Report, with 26% neither for nor against, and only 19% opposed[4] they claimed that they would "not tolerate the waste of taxpayer dollars by studying conspiracy theories".[5]

The 9/11 truth movement undoubtedly has infiltrators designed to spread dissent, confuse, mislead and generally try to stifle its effectiveness. Noting that he was an ex-MI5 operative who got just 2 months in prison for leaking classified documents to the UK commercially-controlled media, Tom Secker suggests that David Shayler is one such - which would explain his bizarre claim to believe that 'no planes' hit the towers on 9/11 - together with later, even more bizarre pronouncements, such as claiming to be the messiah. He also suspects Annie Machon, Shayler's former partner, who quit MI5 with him.[6]

Quite a few people have questioned the sincerity of "Rebekah Roth", who was initially well received after her first book, Methodical Illusion, a roman a clef. The most common concerns include her lack of credible internet footprint, some technical errors which as an experienced stewardess she should not have made, withholding information which she claims to have - directing listeners to buy her book if they wish to know - and her failure to point to the cabal or to expose much new information.[7][8]