Architects & Engineers for 9/11 Truth is probably the best known 9/11 truth group. It has over 2300 qualified architects and engineers as members. As of 2021, it was one of two groups actively pursuing the truth about 9-11.[1] 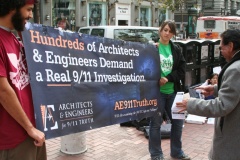 Two people holding a banner of Architects & Engineers for 9/11 Truth.

Architect Richard Gage randomly heard theologian David Ray Griffin speaking to Bonnie Faulkner on Guns And Butter about the destruction of the World Trade Center, and decided to investigate. This lead to the formation of what is , Architects and Engineers for 9/11 Truth (AE911 Truth).

On 25 March 2019, AE911 Truth took "legal action against the FBI aimed at forcing the Bureau to assess and report the evidence known to the FBI of the World Trade Center’s explosive demolition as well as other unreported 9/11 evidence."[3]

The group is reportedly plagued by agent provocateurs who are "propelled to positions of influence"[4] and has also failed to make good use of volunteers.[5]

Wikipedia claimed as of 2018 in its page entitled "List of conspiracy theories" about 9-11 that "the most popular theory is that the attacks were in fact controlled demolitions, a theory which has been rejected by the engineering profession", making no reference to AE911 truth but citing a single paper by Zdeněk Bažant.[6]