The 1991 Madrid Conference was a "peace conference" on the Palestinian/Israeli issue.

This was a conference to facilitate peace between the Palestinians and the Israelis.

In his book The Other Side of Deception, former Mossad agent Victor Ostrovsky tells of a Mossad plan to assassinate President George H. W. Bush, using members of the Mossad-controlled group Abu Nidal as patsies in order to put the blame on the Palestinians.[1]

In an effort to bring the cash-strapped government of Yitzhak Shamir to the negotiating table, President Bush put a freeze on all [U.S.] loan guarantees to Israel, which were to come to a total of ten billion dollars over the next five years.

Upon making that decision, the president was placed on the blacklist of every Jewish organization in the United States, and regarded as the greatest enemy of the state of Israel. In Israel, posters depicting the president with a pharaoh’s headgear and the inscription “We have overcome the pharaohs, we will overcome Bush” were pasted across the country. Shamir called the president’s action “AmBush.”

Israeli messengers in all the communities across the United States immediately went into high gear, launching attacks against the president. They fed the media an endless stream of criticism, while trying at the same time to make it clear to Vice President Dan Quayle that...what the president was doing in no way affected their opinion of him.

This love affair with a vice president was not a new thing; had been almost standard procedure ever since the creation of the state of Israel. Any time a president was not on the best of terms with Israel, the Jewish organizations were instructed to cozy up to the vice president. ... And now there was this peace process, put forth by the country club idiot [George Bush]. The right-wingers’ silent cry was to somehow stop the process, which they believed would lead to a compromise that would force Israel to return more land [taken during the Six Day War]. ... settlers in the Occupied Territories had launched a new wave of construction, with the unrelenting help of Ariel Sharon, the minister of housing.

A certain right-wing clique in the Mossad regarded the situation as a life-or-death crisis and decided to take matters into their own hands, to solve the problem once and for all. They believed that Shamir would have ordered what they were about to do if he hadn’t been gagged by politics. ...

To this clique, it was clear what they must do. There was no doubt that Bush would be out of his element on October 30 when he arrived in Madrid to open the peace talks.

This was going to be the most protected event of the year, with so many potential enemies meeting in one place...The Spanish government had mobilized more than ten thousand police and civil guards. In addition, the American Secret Service, the Soviet KGB, and all the security services of all the countries involved would be on hand.

The Madrid Royal Palace [where the event was being held] would be the safest place on the planet at the time, unless you had the security plans and could find a flaw in them. That was exactly what the Mossad planned to do. It was clear from the start that the assassination would be blamed on the Palestinians – perhaps ending once and for all their irritating resistance and making them the people most hated by all Americans.

Three Palestinian extremists were taken by a Kidon [the Mossad’s assassination branch] unit from their hiding place in Beirut and relocated incommunicado in a special detention location in the Negev desert [in Israel]. The three were Beijdun Salameh, Mohammed Hussein, and Hussein Shahin.

At the same time, various threats, some real and some not, were made against the president. The Mossad clique added its share, in order to more precisely define the threat as if it were coming from a group affiliated with ... Abu Nidal. They knew that name carried with it a certain guarantee of getting attention and keeping it. So if something were to happen, the media would be quick to react and [hold the Palestinians/Abu Nidal group responsible].

Several days before the event, it was leaked to the Spanish police that the three terrorists were on their way to Madrid and that they were probably planning some extravagant action. Since the Mossad had all the security arrangements in hand, it would not be a problem ... to bring the “killers” as close as they might want to the president and then stage a killing. In the ensuing confusion, the Mossad people would kill the “perpetrators,” scoring yet another victory for the Mossad.

They’d be very sorry that they hadn’t been able to save the president, but protecting him was not their job to begin with. With all the security forces involved and the assassins dead, it would be very difficult to discover where the security breach had been, except that several of the countries involved in the conference, such as Syria, were regarded as countries that assisted terrorists. With that in mind, it would be a foregone conclusion where the breach was.

As far as this Mossad clique was concerned, it was a win-win situation.

Ephraim [a Mossad officer who opposed this operation and who at this time was on the side of Ostrovsky] called me on Tuesday, October 1. I could sense from the tone of his voice that he was extremely stressed. “They’re out to kill Bush,” he said. At first, I didn’t understand what he was talking about. I thought he meant that they were going to ruin the president. ...

“What’s new about that? They’ve been out to get him for a long time.”

“I mean really kill, as in assassinate.”

“... You can’t be serious. They would never dare do something like that.”

“Don’t go naive on me now,” he said. “They’re going to do it during the Madrid peace talks.”

“Why don’t you call the CIA and tell them? I mean, this isn’t just some little operation you don’t want to be involved in.”

“I’ll call whoever I have in the European intelligence services. I don’t have friends in the American, not people I can trust, anyway.”

“We are going to do what we can at our end. But nothing we will do will become public. I want you to make this thing public. If they know that the Americans know about it, there is a good chance they will not go ahead.”

I knew that what he said was correct. If I could draw attention to it and make it public, that would do more to stop them than all the intelligence agencies put together. The trick would be to make it public without coming on like some lunatic with yet another conspiracy theory. I would have to say something in a relatively small forum and hope it would get out. If that didn’t work, I’d contact some reporters I knew and give them the lowdown.

As it happened, I was invited to be a speaker at a luncheon held at the Parliament buildings in Ottawa for a group called the Middle East Discussion Group...

The luncheon was attended by some twenty members of the think tank and a few MPs. I made a short presentation in which I explained the goals of the Mossad and the danger it presented to any peace initiative in the region. I also said that in my opinion ... [the settlements in the occupied territories “were probably the biggest stumbling block to the peace initiative”]. Then I opened the floor to questions.

I was asked what the Mossad would do to stop the process that was now taking place. I said that from sources I had, and based on my knowledge of the Mossad, I would not be at all surprised if there was a plot right at this moment to kill the president of the United States and to throw the blame on some extreme Palestinian group. 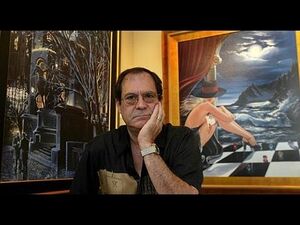 One of the people at the luncheon took note of this and called ex-congressman Pete McCloskey (California), a close friend of the President. On October 15, Pete McCloskey called Ostrovsky and asked him if he thought there was a real threat, or was he just using some sort of metaphor?

I made it clear to him that there was no metaphor involved and that I was dead serious regarding the threat to the president. I also said that I believed that exposing this threat might be enough to eliminate it, since to carry it out would then become too risky.

He said he could come to Ottawa within a few days and asked me if I’d be willing to meet with him. ... [They made an appointment for October 19.]

I met [him] at the Westin Hotel, and we walked over to a small coffee shop... He asked me questions from every possible angle, trying to understand what I was talking about. I could see that he was looking for information he could present that would make the threat realistic. There was no way I could tell him that I’d gotten the information straight from the horse’s mouth, but I had to let him know that I was not completely disconnected from the Mossad. That in itself was a risk; it was the first time I’d allowed this to come out. I felt compelled, however, by the stakes involved.

The next day McCloskey visited Washington D.C. and phoned the White House Secret Service. They referred him to Special Agent Allan Dillon at the Secret Service offices. McCloskey faxed Dillon a copy of the memo he’d written after meeting with Ostrovsky.

On October 22 McCloskey talked to agent Terry Gallagher of the State Department Diplomatic Protection agency and later with Allan Dillon of the Secret Service. On October 24, with less than a week to spare before the Madrid peace conference began, the Secret Service placed a formal request through the American embassy in Ottawa to the Canadian Security Intelligence Service asking to speak – under CSIS auspices – with Ostrovsky, now a Canadian citizen. Ostrovsky then met with a member of the Secret Service with a CSIS agent present.

I told the man what I thought was going to take place, only omitting that I’d obtained the information from an active member of the Mossad. ...

The information leaked to the media, and in a syndicated column, Jack Anderson presented the whole story. So did Jane Hunter in her newsletter, which is a must for any Washingtonian specializing in the Middle East.

I was confident that by now the president was no longer in imminent danger, although the less time he spent in Madrid, the better...

From Ephraim, I heard later that after the president had landed in Madrid, the American embassy there received a bomb threat on the phone, and that a section of the embassy was evacuated while the president was in the building. But the rest of the plan was called off, and ... though the Spanish police received the names and descriptions of the three supposed assassins, they were never let out of the [Mossad] holding facility in the Negev. Later, they were transferred to the Nes Ziyyona research facility, where they were terminated.

Nes Ziyyona is the headquarters of the Israeli biological weapons program, and the three were presumably used in experiments.