Difference between revisions of "Government"

“The most dangerous man to any government is the man who is able to think things out for himself, without regard to the prevailing superstitions and taboos. Almost inevitably he comes to the conclusion that the government he lives under is dishonest, insane, and intolerable...”
H. L. Mencken [1]

Governments are the official ruling bodies of nation states, although one motivation for the creation of this website is the suspicion that a large number of them may in fact be controlled behind the scenes by deep states.

In the 21st century, writes Roberto Saviano in his recent book Zero Zero Zero, “modern nation states have been turning, together with high finance and the multinationals like Shell and Exxon to criminality mimicking the successful narco-cartel models.” [2]

“No matter its guiding “ism,” every government has granted itself the power to initiate violence against its citizens. Just because the ruling agglomerate asserts this privilege doesn’t render it philosophically valid. What it does is legitimate the initiation of violence for any and all causes — domestic and foreign — the government deems proper. Having violated the first principle of nonaggression, nothing can stop that philosophical default from trickling down to the subject population.”
Robert Gore (11 February 2017)  [3] 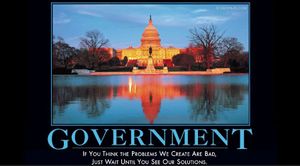