In 1945 Henry Morgenthau, U.S. Secretary of the Treasury published Germany is Our Problem, which describes and promotes the Morgenthau Plan for the occupation of Germany after World War II.

The Plan a proposal to eliminate Germany's ability to wage war following World War II by eliminating its arms industry and removing or destroying other key industries basic to military strength. This included the removal or destruction of all industrial plants and equipment in the Ruhr. It was first proposed by United States Secretary of the Treasury Henry Morgenthau Jr. in a 1944 memorandum entitled Suggested Post-Surrender Program for Germany.[1]

While the Morgenthau Plan had some influence until July 10, 1947 (adoption of JCS 1779) on Allied planning for the occupation of Germany, it was not adopted, especially because of Cold War strategic planning envisaged a strong West-Germany and a rebooted German Deep State as a renewed bulwark against the Soviet Union.

US occupation policies aimed at "industrial disarmament", but contained a number of deliberate "loopholes", limiting any action to short-term military measures and preventing large-scale destruction of mines and industrial plants, giving wide-ranging discretion to the military governor and Morgenthau's opponents at the War Department. An investigation by Herbert Hoover concluded the plan would result in up to 25 million Germans starving to death.[2] From 1947, US policies aimed at restoring a "stable and productive Germany" and were soon followed by the Marshall Plan.

When the Morgenthau Plan was published by the US press in September 1944 it was immediately seized upon by the German government, and used as part of propaganda efforts in the final seven months of the war in Europe which aimed to convince Germans to fight on. 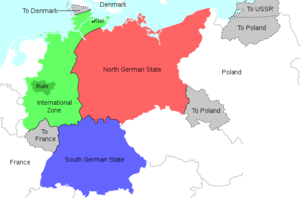 Map of Germany according to the Morgenthau plan

Following the negative public reaction to the publishing of the Morgenthau plan, President Roosevelt disowned it, saying "About this pastoral, agricultural Germany, that is just nonsense. I have not approved anything like that. I am sure I have not. ... I have no recollection of this at all." The president died before the end of the war, and the plan never took effect.

In January 1946 the Allied Control Council set the foundation of the future German economy by putting a cap on German steel production; the maximum allowed was set at about 25% of the prewar production level.[3] Steel plants thus made redundant were dismantled.

Also as a consequence of the Potsdam conference, the occupation forces of all nations were obliged to ensure that German standards of living could not exceed the average level of European neighbors with which it had been at war, France in particular. Germany was to be reduced to the standard of life it had known in 1932.[4] The first "level of industry" plan, signed in 1946, stated that German heavy industry was to be lowered to 50% of its 1938 levels by the closing of 1,500 manufacturing plants.[5]

The problems brought on by the execution of these types of policies were eventually apparent to most US officials in Germany. Germany had long been the industrial giant of Europe, and its poverty held back the general European recovery.[6][7] The continued scarcity in Germany also led to considerable expenses for the occupying powers, which were obligated to try to make up the most important shortfalls through the GARIOA program (Government and Relief in Occupied Areas). In view of the continued poverty and famine in Europe, and with the onset of the Cold War which made it important not to lose all of Germany to the communists, it was apparent by 1947 that a change of policy was required.

The change was heralded by Restatement of Policy on Germany, a famous speech by James F. Byrnes, then United States Secretary of State, held in Stuttgart on September 6, 1946. Also known as the "Speech of hope" it set the tone of future US policy as it repudiated the Morgenthau Plan economic policies and with its message of change to a policy of economic reconstruction gave the Germans hope for the future. Herbert Hoover's situation reports from 1947, and "A Report on Germany" also served to help change occupation policy. The Western powers' worst fear by now was that the poverty and hunger would drive the Germans to Communism. General Lucius Clay stated "There is no choice between being a communist on 1,500 calories a day and a believer in democracy on a thousand."

After lobbying by the Joint Chiefs of Staff, and Generals Clay and Marshall, the Truman administration realized that economic recovery in Europe could not go forward without the reconstruction of the German industrial base on which it had previously been dependent.[8] In July 1947, President Truman rescinded on "national security grounds"[9] the punitive JCS 1067, which had directed the US forces of occupation in Germany to "take no steps looking toward the economic rehabilitation of Germany". It was replaced by JCS 1779, which instead stressed that "[a]n orderly, prosperous Europe requires the economic contributions of a stable and productive Germany".[10]

The most notable example of this change of policy was a plan established by US Secretary of State George Marshall, the "European Recovery Program", better known as the Marshall Plan, which in the form of loans instead of the free aid received by other recipients was extended to also include West Germany.

While the plan was never implemented in Germany, similar ideas seem to have been implemented in other post-war situations. Noticeably Iraq after 2003, which saw a partitioning and the closing of its entire industrial structure, and since then has been an oil kleptocracy.