Stella Ronner-Grubačić is a Dutch diplomat. In 2015[1] she was made Netherlands Ambassador to Romania and Moldova.[2] She served as Netherlands Ambassador to Croatia from 2010 to 2014.[3] She was photographed dining with a businessman convicted of money laundering. She stated that this happened "involuntarily"[4] while the Dutch embassy stated that as she was off duty, the meeting was not official.[5]

Ronner-Grubačić holds a Master of European Studies from University of Amsterdam. She also completed postgraduate studies in International Relations at the Clingendael Institute and the ENA.[6]

From 2004 to 2005 Ronner-Grubačić was Spokesperson of the EU Presidency.

From 2005 to 2008 she served as Head of the Western Europe Department in the Ministry of Foreign Affairs. Next, she was UN Ambassador for Millennium Development Goals. Then she was Head of Mission at the Netherlands Embassy in Zagreb.

In July 2015, Stella Ronner-Grubačić was appointed Netherlands Ambassador to Romania and Moldova, succeeding Matthijs van Bonzel, who left Romania after several scandals. He was accused of involvement in the business of Ovidiu Tender's, who was imprisoned.[7] 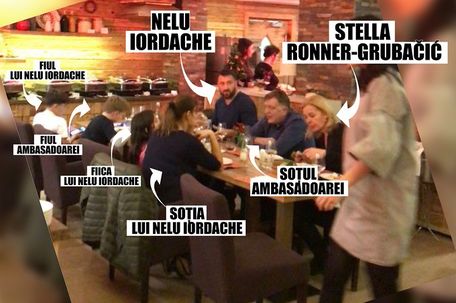 An image of the dinner Ronner-Grubačić had which caused controversy

Between December 30th, 2017 and January 2nd, 2018, Ronner-Grubačić and family were photographed in Poiana Brașov, in the company of the Romanian businessman Nelu Iordache (convicted of money laundering).[4] and Petru Pitcovici (a former police officer charged with drug trafficking).[8] The Embassy of the Netherlands in Romania stated that Ronner-Grubačić had been off-duty and so that the meeting had been unofficial.[5]