La Main Rouge (The Red Hand) was a French group of assassins operated by the French foreign intelligence agency Service de Documentation Extérieure et de Contre-Espionnage, or SDECE, in the 1950s and 1960s. Its purpose was to eliminate the supporters of Algerian independence and the leading members of the Front de Libération Nationale (FLN) during the Algerian War under false flag. [1]

The actions included bombings and killings of German citizens in West-Germany, French citizen in France, and actions in other countries. The murders are numerous: in West Germany, Switzerland, Belgium, Italy and the Netherlands; former agent Constantin Melnik mentions 135 people killed in 1960 alone, 103 in 1961.

Several bomb attacks took place in the Federal Republic of Germany, like the assassination attempts of the arms dealer Otto Schlüter on 26 September 1956 and 3 June 1957, and the killing of Georg Puchert (alias Captain Morris) on 3 March 1959. These would ultimately never be solved.[2]

On 27 November 1959, a 30-year-old,Christian Durieux gave an interview in which he dramatically claimed the attempts against the lives of Schlüter and Puchert and the bomb attack in the port of Hamburg against the cargo ship Atlas on 1 October 1958, all on behalf of an organization called La Main Rouge.[3][4]

The ambassador of the Algerian FLN in West-Germany, Améziane Aït Ahcène, was gunned down on November 5, 1958 in Bonn and died months later in a Tunisian hospital.[5] The attack is attributed to La Main Rouge.[6]

The freighters Emma, en route from Tangier to Gibraltar on 30 July 1957, and Alkaira, in Ostend on 13 April 1959, were destroyed by explosive charges planted by La Main Rouge.[7]

Abroad, the apparent inaction of the French authorities was seen as a sign of French involvement.

France has not opened its archives from this period. However, many agents and officials of the services have testified, from the 2010s, in several places, including a documentary by David Korn-Brzoza, History of the French secret services, as well as in a book by investigative journalist Vincent Nouzille, The Killers of the Republic, based on the corroborating testimonies of French agents.

In The Secret History of the Fifth Republic[8], Roger Faligot and Jean Guisnel designate the Red Hand as “the killing machine of the French secret services”. According to these authors, the green light for this operations was given by the socialist government of Guy Mollet (February 1956-June 1957). “The SDECE thinks up a diversion plan intended to disguise the Operation Homo (sounds funny in English, but short for homicide) as settling of scores perpetrated by a mysterious secret organization, the Red Hand, which would be blamed on hardline colonists […] The Red Hand becomes a convenient signature".

Managed from 1958 by the personal adviser to General de Gaulle, Jacques Foccart, in direct contact with Prime Minister Michel Debré, General Paul Grossin, head of the SDECE, and Colonel Robert Roussillat, head of the Action Service, Operation Arma (intended to destroy weapons before they are delivered to the FLN) and Operation Homo (for homicide) leave no trace in the archives: the green light is given orally by Matignon and the files of the targets are burned after their execution[9].

The legend spread in the media, soon fueled by the strange confessions given on November 27, 1959, in the British Daily Mail by a certain Christian Durieux, a young Corsican teacher. He openly claimed to be one of the leaders of this organization, later repeating the daring statements in newspapers and press conferences. A book written by a spy novelist, Pierre Genève, and published in 1960 by an obscure publishing house, retraces the epic of the Red Hand, while justifying the attacks. In reality, everything is "made by the propaganda experts of the SDECE, who write in this disguise".[10]

The agent Bob Maloubier, a former resistance fighter who had participated in the creation of the French secret military unit Service Action, responsible for clandestine assassinations, sums up the operation: “Every time something happens, we say: it's the Red Hand! And the Red Hand did not exist at all! It covered the service… It was a great idea”.[11]

Constantin Melnik, although technical advisor to French Prime Minister Michel Debré for security and intelligence matters from 1959 to 1962, was kept away from operations, he said: “The inventive secret services actually say: we can participate in the destruction of the FLN, and for that, possibly, we could invent an imaginary organization which would be called the Red Hand ”[12].

In Tunisia, the Red Hand is notably credited with the assassination of the nationalist activist and secretary general of the Tunisian General Labor Union Farhat Hached, on December 5, 1952, as well as those of other figures of the Tunisian national movement: Hédi Chaker on September 13, 1953, Abderrahmen Mami, nationalist and private doctor to the Bey of Tunis, July 13, 1954, then the brothers Taher and Ali Haffouz in Kairouan[13]. According to Antoine Méléro, a French colonist police officer from Casablanca who took part in the operations, the Red Hand allegedly committed around forty attacks in Tunisia. “We were about twenty reliable guys,” he explains, “with intelligence specialists, a protection team and the Action Service, in charge of the assassination operations decided in Matignon. I started in North Africa, before acting more widely when things were going badly in Algeria ”[14] 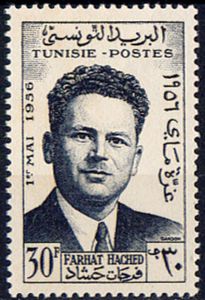 Tunisian nationalist circles see a connection between the Red Hand and the party that represents the French settlers, the Rassemblement français de Tunisie. Antoine Colonna, the leader of this party, is thus considered to be the founder of the Red Hand[15]. The Tunisians independence party organized, through its armed supporters, a campaign of assassinations against settlers in reaction to the murders of Tunisians.

Morocco: the assassination of Lemaigre-Dubreuil

Antoine Méléro, who joined the police in Morocco in March 1952, started participating in the operations of the Red Hand in December of the same year. He was suspected in connection with the assassination of the French citizen and supporter of [Morocco|[Moroccan]] independence, Jacques Lemaigre Dubreuil, on June 11, 1955. He was arrested on his return to France, placed in pre-trial detention and then released; the case was dismissed in 1964; he was dismissed from the police in 1965.

Actions in Europe against Algerian independence

Allegedly. the targets systematically received death threats before the death squads take action if they continued their pro-FLN activities. Thus, the German arms dealer Wilhelm Beisner, a former Nazi who served in Yugoslavia, who did not take seriously the threat, loses a leg when his car exploded in 1960.

The first Red Hand attack in Europe took place on September 28, 1956 in Hamburg (West Germany), at the home of Otto Schlütter, an arms trafficker who supplied the Algerian FLN, killing an associate; another attack killed his mother in June 1957.

On September 9, 1957 in Geneva, a manufacturer of detonators, Georges Geitser, was stabbed. Then, on the 19th, still in Geneva, Marcel Leopold, another arms trafficker, was assassinated by a poisoned arrow fired from a blowpipe,[16].

Then, on March 3, 1959, a detention charge went off in Frankfurt am Main when Puchert started the engine of his sand-gray Mercedes 190. Puchert collapsed over the steering wheel. Der Spiegel at the time[17]: 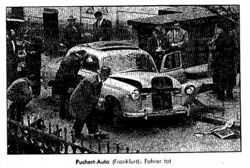 On November 5, 1958, lawyer Améziane Aït Ahcène - a delegate of the Provisional Government of the Algerian Republic who ensured contact between the FLN and arms traffickers thanks to his diplomatic passport - was executed with a machine gun in the center of Bonn, the West German capital[18]. Der Spiegel denounces this attack as being the work of France, while L'Humanité and L'Express accuse a certain Colonel Mercier.

A failed operation, on July 5, 1959 in Rome, which targets FLN representative Taïeb Mohamed Boulhouf, kills a ten-year-old child, Rolando Rovai, who activatesthe detonator of a car bomb while playing in the street[19]. “The arms dealer had had his car bombed by an explosive charge, which was tied by a virtually invisible nylon thread to a hook attached to the wheel. When the wheel started to move, the wire tightened and the load worked. And there it turns out that a kid who was playing in the street threw his ball at the car. The thread has been stretched. I think that is the only real mistake we had to record”[20] testifies agent Raymond Ruelle.

The kill operation against lawyer Jacques Vergès fails because of a car breakdown by the Service Action team. "If it had started, we risked losing Master Vergès" [21], testifies Raymond Muelle, the head of the operation. He also affirms that all the orders came directly from the political power: at the time, Michel Debré.

The murders committed are numerous: in West Germany, Switzerland, Belgium, Italy and the Netherlands according to Faligot and Guisnel; Constantin Melnik mentions 135 people killed in 1960 alone, 103 in 1961.

1 January 2021 Terje  Less known than the CIA, the French certainly can play dirty