Mohamed Lahouaiej Bouhlel was blamed for the Nice truck event. He was reportedly shot dead by police after he shot at them with a pistol.[1]

Bouhlel sent £84,000 to his family in Tunisia just days before the attack, according to his brother.[2] In this respect he prefigured a "lone nut" of a year later, Stephen Paddock.

Mohamed Lahouaiej Bouhlel was reported to have have mental health problems, and has also been called not a ‘lone wolf’. However, French TV reported that he sent an SMS at 10.27pm on Thursday saying: "Bring more weapons, bring five of them to C." An earlier message said: "It’s good. I have the equipment."[1] 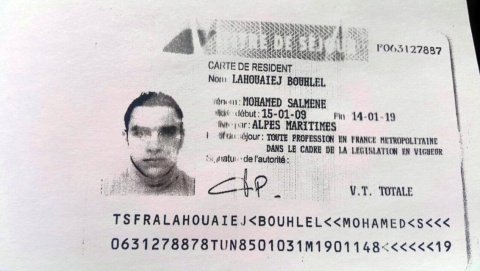 He has been called a Muslim, but his neighbours report that he "drank alcohol, ate pork and took drugs".[1] The Commercially-controlled media reported that "was he was radicalized within months" and quotes his estranged wife that "Mohamed only started visiting a mosque in April."[3]

The Daily Mail reported that Bouhlel "was on a cocktail of drugs for schizophrenia, alcoholism and depression."[1]

He was reportedly shot dead by police after he shot at them with a pistol.[1]