Natacha Jaitt was a Jewish Argentinian model, actress, and TV & radio presenter turned whistleblower of child sexual abuse among Argentinian politicians, journalists and athletes and Gustavo Vera, a close friend of the pope.[1][2][3]

Throughout 2018, Jaitt threatened to reveal the identities of sports and entertainment personalities with links to child prostitution.

Jaitt attended as guest on the Argentinian program La noche de Mirtha, where the 2018 investigation of child sexual abuse at Argentina's Club Atlético Independiente was being discussed. During the investigation, one of the players said that four phone numbers were allegedly used to pay children to have sex with adults.[4][5] Jaitt said that those numbers belonged to journalists and politicians. Fellow guests, journalist Mercedes Ninci and sports author Gustavo Grabia, began chivying Jaitt for making these statements.[6][7] The program's host Mirtha Legrand later apologized for having Jaitt on the program.

Jaitt's testimony to the prosecutor of the Office of Avellaneda led to the arrest of seven pedophiles.[8] Leonardo Cohen Arazi and Martín Bustos were acquitted on the grounds that there was no child sex, only the "promotion" of child prostitution.[9][10]

Jaitt also stated that that director Pablo Yotich and Maximiliano Giusto personally drugged and raped her. She attended a judicial hearing in the related case, which would be her last public appearance.[11][12]

Natacha Jaitt was found dead on 23 February 2019, naked on a bed at Tigre Partido, of an alleged "suicide".[13] Argentinian police reports stated that there were no signs of violence, but her lawyer pointed out inconsistencies in the police reports and stated that Jaitt was murdered.[14]

Argentinian businessman and producer Raúl Velaztiqui was arrested for false testimony regarding Natacha Jaitt's death, having lied on three different occasions about the circumstances of her death.[15]

Her remains were buried in La Tablada Jewish Cemetery.[16] 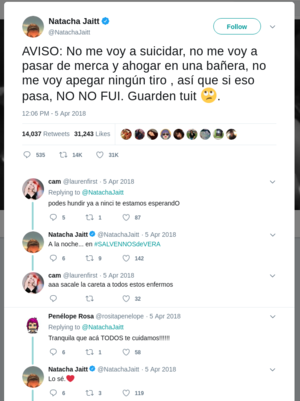 On 5 April 2018, Jaitt made a post on her personal Twitter account, warning her followers that she was not intending to commit suicide, writing "NOTICE: I am not going to kill myself, I am not going to be bought off or drown in a bath tub, I am not going to shoot myself in the head, so if that happens, I DIDN'T DO IT. Save this tweet."[17][18]

A Quote by Natacha Jaitt