Lori Bolterstein[1] Klausutis was an intern for Joe Scarborough. She was found dead at her desk aged 28 at around 8 a.m. on 19 July 2001 by a couple who came to discuss a work permit issue. An autopsy noted that she had a hairline skull fracture,[2] but concluded that she died of accidental death after an undiagnosed heart issue caused her to lose consciousness and hit her head on the desk.[3] Not everyone was satisfied that this was a case of accidental death,[4] and Donald Trump used Twitter in 2017[5] and 2020[6] to suggest that the case be re-opened.

Klausutis' body was "found July 20 around 8 a.m. by a couple who arrived at the office in Fort Walton Beach for an appointment. She was found slumped over next to a desk on the floor of Scarborough’s office. A second employee who was normally at the office was away on vacation, and it was determined that she was dead for some time."[7]

"A 28-year-old office worker for U.S. Rep. Joe Scarborough was found dead Friday in the congressman’s district office. Preliminary findings from the medical examiner’s office showed no foul play or any outward indication of suicide, said Police Chief Steve Hogue. Authorities identified the woman as Lori Klausutis of Niceville. She had worked for Scarborough since May 1999, said Mick Serrano, press secretary for the congressman."[8]

A month later, a medical examiner[Who?] concluded that Klausutis had been feeling unwell and had died after heart problems caused her to fall and hit her head on the desk. No signs of foul play. Case closed.[8]

Roger Shuler wrote in the Daily Kos in 2011 that "the mainstream press largely ignored the case, but our review of several investigative reports indicates the official finding is highly questionable".[9][10][11]

Keith Mann noted in August 2019 that "The police report said there were two people who stopped by Scarborough’s office that day and saw Lori before she died. They both said that Klausutis told them she was “anxious and did not feel quite right.”"[12]

Scarborough’s press secretary, Miguel Serrano also stated that Klausutis had known of prior “health conditions” but didn’t provide specifics when questioned. However, according to her family she had no health condition and was a documented marathon runner who had recently run an 8K with a respectable time.[13][14] So why would Serrano say she did? But her own family is saying she didn’t?[15]

Dr. Michael Berkland reportedly had a checkered past; CBS News reported, “Before arriving Florida, Berkland was fired as a contract medical examiner in 1996 in Jackson County, Missouri, in a dispute over his caseload and autopsy reports. His doctor’s license was ultimately revoked there.”[16] He was fired in Kansas in a dispute over his caseload of autopsy reports, including unproven allegations that he had fabricated some details. He lost his Florida job in 2003[17] for “being slow to complete autopsy reports.” He was charged with stealing some of the 100 body parts found in a storage unit he rented in 2012.[18]

Since his election to the US Presidency, Donald Trump has made multiple references to the case of Lori Klausutis.

So now that Matt Lauer is gone when will the Fake News practitioners at NBC be terminating the contract of Phil Griffin? And will they terminate low ratings Joe Scarborough based on the “unsolved mystery” that took place in Florida years ago? Investigate![5]

This sparked further reporting by the commercially-controlled media, some of which used the phrase "conspiracy theory".[15][19] The Washington Post's piece, entitled Trump suggested the 2001 death of a Joe Scarborough aide is an ‘unsolved mystery.’ It isn’t. cited a report from the St. Petersburg Times (now known as the Tampa Bay Times) that she reportedly "was under moderate stress in the days before she died" and that a "mail carrier who came in the office on July 19 said she appeared nervous. He said Klausutis told him she did not feel well."[20] 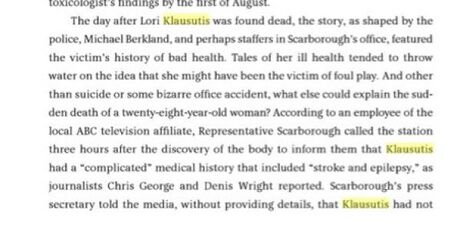 In a January 2018 article for NewsPunch, New Evidence Links Joe Scarborough To Intern’s Suspected Murder, John White claimed that "It was Scarborough himself who was writing the “official narrative” being pumped over the airwaves just hours after Lori was found! HE was the source of the claims about her health" and asked "What might a young woman have heard in a Republican office 2 months before 9/11? What if she learned something she wasn’t supposed to?"[4]

In August 2019, after the sudden death of Jeffrey Epstein while in US prison, an article by Heavy brought further attention to the Klausutis story.[22]

“Concast” should open up a long overdue Florida Cold Case against Psycho Joe Scarborough. I know him and Crazy Mika well, used them beautifully in the last Election, dumped them nicely, and will state on the record that he is “nuts”. Besides, bad ratings! #OPENJOECOLDCASE.[6]

When will they open a Cold Case on the Psycho Joe Scarborough matter in Florida. Did he get away with murder? Some people think so. Why did he leave Congress so quietly and quickly? Isn’t it obvious? What’s happening now? A total nut job![23]

Trump's tweets were widely criticised by commercially-controlled media.[24] On 28 May 2020, Peter H. Schuck opined for the New York Times that Trump’s "Horrifying Lies" About Lori Klausutis May Cross a Legal Line.[25]