Professor Gert Johannes "Jakes" Gerwel was a South African academic and anti-apartheid activist who became involved in the Black Consciousness Movement, led by Steve Biko, in the late 1960s. Jakes Gerwel was an educational adviser to the South African Students' Organisation (Saso) in the early 1970s and went on to become a university lecturer. Following the 1980 education protests when he was detained by police, Gerwel was appointed a Professor at the University of the Western Cape (UWC) and, just two years later, became Dean of the Arts Faculty. Professor Gerwel was appointed UWC Vice-Chancellor five years later. In 1989, he and Archbishop Desmond Tutu were arrested during a march in Cape Town.

During the early 1990s Professor Jakes Gerwel was elected a member of the ANC's Western Cape regional committee and in 1994 was appointed to the post of Director-General in President Nelson Mandela's office.[1]

In an interview in August 1998, Professor Gerwel said:

"We often forget the miracle of our transition, the fact that a country so deeply divided managed to negotiate a settlement and establish a democratic order, and establish a government of national unity and managed to establish national unity amongst the diverse, cultural, ethnic but particularly political groupings which we have in the country. So really one doesn't need to be very profound actually to make the statement that what has changed fundamentally in South Africa is that it has got a democratic government; South Africa has a government, has got a polity in which all of its people and all its political tendencies hold together."[2]

In the late 1990s, Jakes Gerwel was instrumental in brokering the deal that saw two Lockerbie bombing suspects, Abdelbaset al-Megrahi and Lamin Khalifa Fhimah, extradited from Libya to stand trial at Camp Zeist in the Netherlands.[3] Following Mandela's presidency, Professor Gerwel chaired the Nelson Mandela Foundation and took up a number of academic and business positions until his death in November 2012.[4]

Jakes Gerwel matriculated from Paterson High School in Port Elizabeth, and in 1967 earned a Bachelor of Arts degree from the University of the Western Cape (UWC). He then lectured at the Hewat Teachers' Training College in Crawford, Cape Town for a short time before receiving a scholarship, in 1971, to study at the University of Brussels. On his return to South Africa, Gerwel first taught at Grassy Park High School and then returned to UWC as a lecturer.[5] 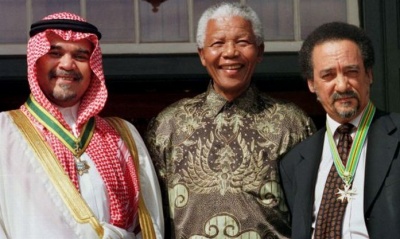 According to Paul Foot's article "Lockerbie: the Flight from Justice", Nelson Mandela was irritated by the continued sanctions on Libya. He was friendly with Muammar Gaddafi, who had contributed generously to the African National Congress, Mandela’s party, when it was engaged in illegal and armed opposition to the apartheid regime. He firmly believed that Libya was being singled out for special hostility by the United States and, in the case of Lockerbie, he regarded the treatment of Libya as unfounded and unfair. To the intense irritation of the US State Department he launched a diplomatic offensive to persuade Gaddafi to release the two men for trial by Scottish judges in Europe. Mandela chose as his chief negotiator and plenipotentiary his most trusted adviser and confidant, the secretary to the South African Cabinet and head of the country’s civil service, Professor Jakes Gerwel, former vice-chancellor of the University of the Western Cape. Mandela also persuaded Prince Bandar bin Sultan of Saudi Arabia to take part in the negotiations with Gaddafi. The Prince and the Cabinet Secretary, Mandela knew, were trusted by the Libyan president as much as anyone else in the world. The negotiations went on for a year until 5 April 1999 when the two Libyan suspects finally gave themselves up for trial by Scottish judges under Scottish law (with one exception: everyone agreed that the men should be tried without a jury).

On that morning Professor Gerwel wrote a dramatic and moving account of the negotiations:

"As I write this, I am sitting in a Libyan Air Force plane high over the desert flying to Djerba, the airport in Tunisia from where I so often in these last twelve months had to undertake that five-hour car journey to Tripoli and back, because of the UN embargo on direct flights to Libya. This flight itself is historic; it is the first across Libyan borders since the suspension of sanctions came into effect earlier this afternoon. Prince Bandar bin Sultan, my Saudi counterpart and negotiating partner, and I are returning from a visit to pay respects to the Libyan leader Muammar Gaddafi in the oasis town of Sebha far down south in the great Libyan desert. Earlier tonight the three of us were sitting there, almost huddled together in one of those large and colourful makeshift tents the Colonel loves so much: talking, reflecting, ruminating, laughing sometimes ruefully and at times raucously over muscular Arab jokes.
"In some ways we are for these few hours three men far away from the maddening crowd; in various stages of over fifty, from different political and social backgrounds and countries but for that time just three men enjoying each other’s company. In other respects the world remains with us: we talk, even though with almost disinterested passion, tonight of Kosovo and our different readings of it: Gaddafi and Bandar banter about Arab politics and let Jaakis (as Gaddafi calls me) into it. As Africans Gaddafi and I solve the problems of our continent with Bandar fully sharing as contributing translator.
"Overall our conversation and banter, though, hover, like bats on a Karoo night, our unspoken thoughts of Megrahi and Fhimah, Libyan sons whom all three of us have handed over to foreign jurisdiction.Understandably, most would see this day as one of proud achievement and fulfilment for us – for President Mandela, South Africa, myself personally and our negotiating allies, the Saudi sovereign and Crown Prince and Prince Bandar in particular. Yet one’s major feeling tonight is one of quiet sadness.
"This morning was the first time that I or Bandar met Megrahi or Fhimah. The two of us were there as special guests of the government and people of Libya. Many will now claim the credit for this saga being concluded. If you were to ask the Libyans and Gaddafi you will be told that it was the word and moral authority of Mandela that provided to them sufficient guarantee and persuasion to take this step. And concretely that it was Jakes and Bandar who patiently over many months, many meetings over long hours of discussion often late into the night built personal relations of rust with the Leader. Gaddafi deeply distrusts the West and the United States in particular, while their distrust and vilification of him are no less intense. In the end it was us that he trusted and because of whom he conceded.
"Now we are here this morning to be a Libyan part of the surrender of the two men. We were first let in to greet the men and sit with them prior to departure. We were the two asked to accompany them onto the tarmac and to the plane. All along Bandar and I had been dealing with matters of international diplomacy, politics and law, seeking to secure the ‘handing over of the suspects’. Now beside us were two men, fathers of five and seven children respectively. He married at 21, Fhimah explains his seven children to me. They (Megrahi and Fhimah) are smartly dressed in Italian suits and look exactly like two gentlemen from Belhar where I live. They carry heavy overcoats and remark about the cold this time of year. I shiver when I think of the kind of cold they are going to."

The terms for the release and trial of the two men were set out in an annexe to a letter to the Libyan head of state from the Secretary-General of the United Nations, Kofi Annan, a few weeks before the men’s surrender on 17 February 1999. They would be "transferred from Libya to the Netherlands and tried under Scottish law before a Scottish court sitting in the Netherlands". If found guilty, after any necessary appeals process, they would serve their prison sentences in Scotland. If not convicted, they were free to return to Libya unimpeded. They would be absolutely free from any interview unconnected with the trial. They "will not be used to undermine the Libyan regime".

In exchange, the UN Security Council sanctions resolutions 748 and 883 would be suspended immediately the two men arrived in the Netherlands, and could only be re-imposed by a vote of nine members of the Council, including the votes of all permanent members. The sanctions were suspended in April 1999, and an entirely new court was built at great expense at a disused military base at Camp Zeist near Utrecht in Holland.[6]

This page imported content from Wikipedia on 24 April 2014.
Wikipedia is not affiliated with Wikispooks.   Original page source here
Retrieved from "https://wikispooks.com/w/index.php?title=Jakes_Gerwel&oldid=97126"
Categories: