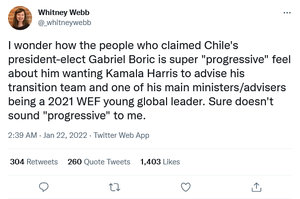 Izkia Jasvin Siches Pastén is a Chilean doctor and politician. Siches formerly served as president of the Chilean Medical College, an influential medical association. During the Covid-19 deep event she was a prominent talking head in corporate media, pushing for harder lockdowns and more "testing, tracing and isolation”.[1] [2]

In 2021, Siches served as campaign manager for Gabriel Boric's successful presidential campaign.[3] On January 21, 2022, she was named by President-elect Boric as Minister of Interior and Public Security, the second most important in government after the President.

She was born on 4 March 1986 in Arica[4][5] in far-North Chile and grew up in Maipú, Santiago Metropolitan Region.[4] She studied at the Instituto Bernardo O'Higgins high school in Maipú.[6]

After graduating in medical surgery, she specialized in internal medicine and obtained a master's degree in public health. Since 2014, she has been working as an infectious disease specialist at the San Juan de Dios Hospital in Santiago.[4]

In 2020 during the beginning of the COVID-19 deep event, she played a major role due to her position as president of the Medical College, making "evidence based" recommendations.[9]

This admirer of New Zealand Prime Minister Jacinda Ardern took advantage of the confinement to take the time to cook, she who never considered herself a cordon bleu.

This page imported content from Wikipedia on 01.01.2022.
Wikipedia is not affiliated with Wikispooks.   Original page source here
Retrieved from "https://wikispooks.com/w/index.php?title=Izkia_Siches&oldid=235961"
Categories: